Check out this beautiful block of text from the Poetry Foundation, an educational website ostensibly dedicated to the subject it has named itself after:

There are two things to think about here. One is the fact that the poetry website is only superficially about poetry, even though it proudly claims the mantle of all things belonging to the realm of the poet. In reality, the Poetry Foundation is one of the many well-funded arms of the political left.

Here’s the thing, though. The folks at the Poetry Foundation don’t think they’re engaged in leftist political activism. They think they’re doing the work of a poetry foundation. To them, there is no distinction between poetry and left-wing politics. It’s like the partisan who claims to be a political moderate while calling for the wholesale nationalization of medical and financial markets. We’re not dealing with a vicious, concerted effort to uproot the liberal order. We’re dealing with obstinate people in cliques who believe they have more knowledge than everybody else. (By the way, the excerpt above was what the well-respected leftist website 3 Quarks Daily, which shows NOL some love from time to time, used to promote the article.)

The second thing I’d like to focus on is the narrative itself. A radical left-wing government was elected and, once in power, immediately began repressing other rivals factions. (Do you think labor groups and other leftist organizations were the only ones repressed by González Videla?) This is not a new phenomenon. This is what radicals, on both the left and the right, do. Just ask the Russians. Or the Venezuelans.

Yet look at how this well-documented repression – by a left-wing, democratically-elected Chilean government – is portrayed by the Poetry Foundation. Instead of owning up to the fact that radical governments, even democratically-elected ones, tend to resort to violence when their unfeasible ideas are finally put into place and inevitably, predictably fail, Harry Truman gets blamed.

So a radical leftist government gets elected and starts repressing its former allies (and, it is assumed, its enemies) because Harry Truman told this radical, democratically-elected leftist that the Soviet Union and the United States were going to fight in a war and the Americans were the side Chile should ally with? Obstinate ignorance!

Before I sign off, it’s worth noting that González Videla was elected in 1946. Allende was elected in 1973. In the nearly 40 years between them lots of people on both sides of the aisle died for political reasons. People didn’t stop dying until well into the 1980s. Yet, somehow, Milton Friedman and F.A. Hayek (and Harry Truman) are to blame for all of Chile’s Cold War woes.

In a recent post, I pointed out that life expectancy in Cuba was high largely as a result of really low rates of car ownerships.  Fewer cars, fewer road accidents, higher life expectancy. As I pointed out using a paper published in Demography, road fatalities reduced life expectancy by somewhere between 0.2 and 0.8 years in Brazil (a country with a car ownership rate of roughly 400 per 1,000 persons). Obviously, road fatalities have very little to do with health care. Praising high life expectancy in Cuba as the outcome Castrist healthcare is incorrect, since the culprit seems to be the fact that Cubans just don’t own cars (only 55 per 1,000). But that was a level argument – i.e. the level is off.

I say “wait just a second”.

This does not alter the trend of life expectancy in Cuba dramatically, but it does alter it in a manner that forces us, once more, to substract from Castro’s accomplishments. This increase would not have been the offspring of the master plan of the dictator, but rather an accidental side-effect springing from policies that depressed living standards so much that Cubans drove less and were less subjected to the risk of dying while driving. However, I am unsure as to whether or not Cubans would regard this as an “improvement”.

Below are the comparisons between Cuba, Chile and Brazil. 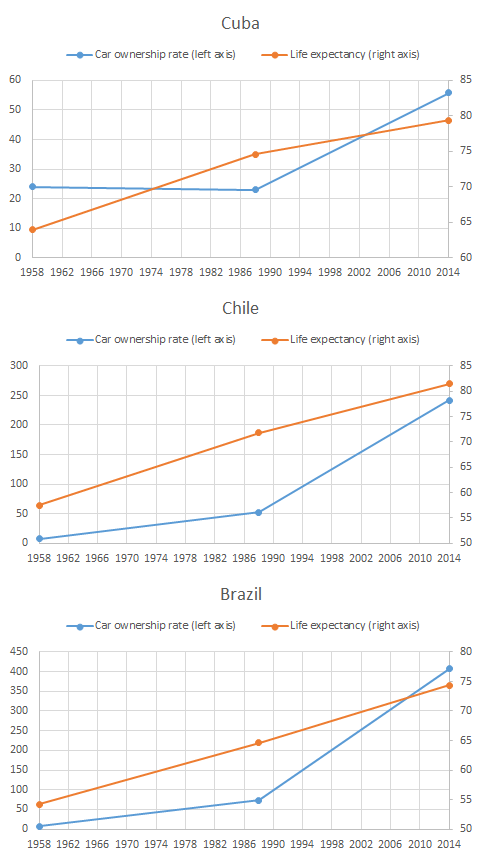 The other parts of How Well Has Cuba Managed To Improve Health Outcomes?

Since the passing of Fidel Castro, I have devoted myself to researching a proper assessment of his regime’s achievements in matters of health care. The more I dig, the more I am convinced that his regime has basically been incredibly brilliant at presenting a favorable portrait. The tweaking of the statistics is not blatant or gigantic, it is sufficiently small to avoid alerting demographers (unlike when Davis and Feshbach, Eberstadt and Miller and Velkoff found considerable evidence of data tweaking in the USSR which raised a massive debate). Indeed, a re-computation of life expectancy based on life tables (which I will present in the new few weeks) to adjust for the false reclassification of early neonatal deaths as late fetal deaths (raising the low infant mortality rate by somewhere 28% and 96%) suggests that somewhere between 0.1 and 0.3 years must be knocked off the life expectancy figures. Given that the variations between different measurements available (WHO, World Bank, MINISAP, CIA, FAO) are roughly of that magnitude, it falls within a very reasonable range of errors. This statistical tweaking is combined with an over-dramatization of how terrible the situation was in 1959 (the life expectancy figures vary from 63.9 years to 65.4 years at the beggining of the Castrist regime). But that tweaking is not sufficient to invalidate the massive downward trend.  As a result, the majority of public health scholars seem confident in the overall level and trend (and I tend to concur with that statement even if I think things are worse than presented and the slope of the downward trend is too steep).

Those little tweaks have been combined with the use of massive coercive measures on the local population (beautifully described  by Katherine Hirschfeld in what should be an example of ethnographic work that economists and policy-makers should rely on because it goes behind the data – see her book Health, Politics, and Revolution in Cuba: 1898-2005) that go from using doctors as tools for political monitoring to the use of abortion against a mother’s will if it may hinder a physician’s chance of reaching the centrally-decided target without forgetting forced isolations for some infectious patients. Such methods are efficient at fighting some types of diseases, but they are associated with institutions that are unable to provide much economic growth which may act as a palliative counter-effects to how choices may make us less healthy (me having the freedom to eat too much salt means I can die earlier, but the type of institutions that let me eat that much salt also avoid infringing on my property rights thus allowing me to improve living standards which is the palliative counter-effect).  With such a trade-off, the issue becomes one of the ability of poor countries to improve in the absence of extreme violence as that applied by the Castrist regime.

Over the next few weeks, I will publish many re-computations of health statistics to sustain this argument as I write my article.  The first one I am doing is the evolution of life expectancy from 1960 to 2014. What I did is that I created comparatives for Cuba based on how much living standards (income per capita). Cuban living less than doubled over that 49 years period (82% increase) from 1959 to 2008 (the latest available data from the high-quality Maddison data).  Latin American and Carribean countries that saw their living standards less than double (or even decline) are Argentina (+90%), Bolivia (+87%), El Salvador (+68%), Haïti (-33%), Honduras (+71%), Jamaica (+51%), Nicaragua (-17%) and Venezuela (+7%). This forms the low income group. The remaining countries available are separated in two groups: those whose income increased between 100% and 200% (the mid-income group composed of Brazil, Colombia, Mexico, Peru, Uruguay, Ecuador, Guatemala, Panama and Paraguay) and those whose incomes increased more than 300% (the high-income group composed Chile, Costa Rica, Dominican Republic, Puerto Rico and Trinidad & Tobago).  I also compared Cuba with a group of countries that had incomes per capita within 20% of the income per capita of Cuba.  So, how did Cuba’s life expectancy increase?

Well, using only the official statistics (which I do not fully trust although they are from the World Bank Development Indicators Database), Cuba life expectancy (which was already pretty high by Latin American standards in 1959) increased 24%. However, all other countries – which were well below Cuba – saw faster increases. The countries that had the least growth in Latin America saw life expectancy increase 38% and the countries that were equally poor as Cuba saw life expectancy increase an impressive 42%. Chile, whose life expectancy was only 57.5 years against Cuba’s 63.9 in 1960, also increased more rapidly (also 42%) and it has now surpassed Cuba (81.5 years against 79.4 years) and what is more impressive is that this rate has increased in a monotonic fashion regardless of changes in political regimes (democracy, socialism, Pinochet, liberal democracy) while Cuba’s rate seems to accelerate and decelerate frequently. Now, this is assuming that the figures for 1960 are correct. I have surveyed the literature and it is hard to find a way to say which of the estimates is the best, but that of the World Bank for 1960 is the lowest. There are other rates, contained in McGuire and Frankel’s work – the highest stands at 65.4 years for 1960. That means that the range of increase of life expectancy in Cuba is between 21.4% and 24.2%. Its not earth-shattering, but it makes Cuba’s achievements less impressive (although it is impressive to keep increase life expectancy from an already-high level). But as you can see, more important improvements could have been generated without recourse to such violent means. In fact, as a post that I will publish this week shows, the decline in car ownership from 1959 to 1988 probably played moderately in favor of the increase in life expectancy while the massive increase in car ownership in all other countries played (all else being equal) in favor of slowing down the increases in life expectancy (but being too poor or making it illegal to import a foreign car is not health care and I deem it improper to consider that this accident from misfortune should be praised). 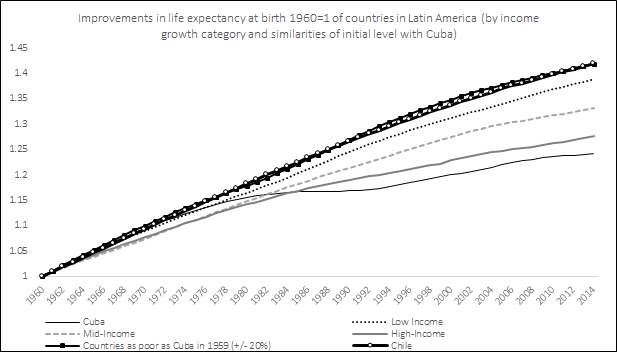 In a way, what I am saying is that the benefit is not as impressive as claimed. Given the costs that Cubans have to assume for such a policy, anything that makes the benefits look more modest should make more inclined to cast a damning judgment on Castro’s regime.

Coming up (I will add the links as they are published) :