I am still working from home. The weather has been spectacular here over the past few days. I immediately head outside with the kids at 5 o’clock. We just run around and play. The younger one likes throwing the football around in the grass. The older one likes to play with the ants in the cracks of the sidewalk.

I was looking forward to going to Oslo this fall, but I just received news that the event has been postponed. I’ve still got the inaugural family camping trip to Ouachita to plan, so that’s exciting.

The political landscape here is much different than it is on the west coast or in Austin. Authority is decentralized. There are more black and Mexican people here, and fewer other minorities (including Central Americans). I have more black friends now than I ever did in California. It’s odd. In some ways, the non-South is now more racist than the old South. I can’t put my finger on it but I swear it’s true. You can carry on a friendly conversation with anybody here, something that’s missing out west and up north.

My guess is that this has something to do with the fact that segregation was blatantly racist in the South during the Cold War, and Washington felt it had to do something about it in order to win friends (despots) abroad. The racism in the north and the west was less blatant, and as a result nothing has ever been done about it.

I mean, I didn’t grow up with any black people. Or Mexicans. There are tons of them in California, but they don’t live in white residential areas. Down south, at least in the parts of Texas I’ve lived in, this is not the case. There are still “sides” of town, but at least we all share the same town. There’s still racism here, but the racism is more honest than, say, the zoning found up north and out west. This familiarity between blacks, Mexicans, and whites is something you as an individual have to work hard on to achieve in the non-South.

The federal government forcibly dismantled Jim Crow. It did so only after it conveniently ignored the 14th Amendment for decades, but at least it finally did so. There’s a place for Washington down here in Texas. Decentralized tyrannies are still tyrannies. I just started watching Waco, the Netflix series. It’s good. Washington is responsible for the deaths of several innocent women and children. It’ll never pay the price. Those people were just too strange for the broad public to really give a shit.

Libertarianism hasn’t been able to shake its racist stigma yet. Sure, leftists call us racists all the time, but a kernal of truth is still a kernal of truth. I have witnessed several people I once respected sweep libertarianism’s ugly, recent past under the rug and then turn to grab their paycheck. Libertarian Inc. has its place in our society, but it won’t be effective so long as the racist label sticks with us. And the racist label won’t come off until we grapple with the brutal truth of what we’ve become comfortable with and what we will tolerate.

END_OF_DOCUMENT_TOKEN_TO_BE_REPLACED

After a full year of research, the largest, most comprehensive report on the economics, politics, history, and policies of zoning in Toronto is available for download.

The full report is available both on the Housing Matters website, and quickly downloadable here: Rethinking the Yellowbelt.

The “Yellowbelt” refers to the portion of the city that’s zoned exclusively for detached homes. The report goes into detail explaining when and why such a zone came into existence, where it spreads in the city, who is hurt by the existence of this zone and how; and what it will take to change the system.

A summary of the report follows. Of course, the report itself goes into much more detail.

END_OF_DOCUMENT_TOKEN_TO_BE_REPLACED

I have just completed a short piece on the impact of regional prices on the measurement and geographic distribution of low income individuals. Basically, Youcef Msaid and myself* used the March 2012-CPS data combined the BEA’s regional purchasing power parities database to correct incomes.

We found is that the level of inequality is very modestly overestimated (0.5%). Now this is a conservative estimate since we used state-level corrections for price differences. This means that we took price corrections for New York state as a whole even if there are wide differences within New York state. Obviously, with more fine-grained price-level adjustments we would find a bigger correction but it is hard to imagine that it could surpass 1-3%.

That was not our most important result. Our most important result relates to where the bottom decile of the income distribution is geographically located. We find that instead of being found disproportionately (relative to their share of the total US population) in poorer states, the bottom decile is disproportionately found in rich states. The dotted black line in the figure below illustrates the change in the number of individuals who are, nationally, in the bottom 10%. New York and California have significant increases while West Virginia has a large decrease. The dark black line shows the same for the top 10%. 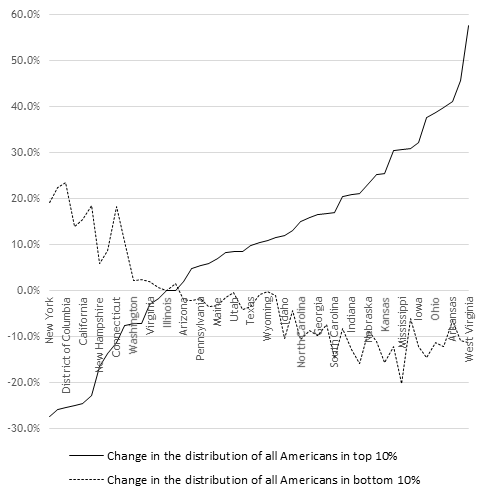 Another way to grasp the magnitude of this change is to relate the change to the population shares of each decile by state. For example, New York had 6.29% of the US population in 2012 and 6.61% of all Americans in the bottom 10% of the income distribution before adjusting for regional purchasing parities. After adjusting however, New York’s share of the bottom 10% surges to 7.88%.

Why does it matter? Because most of the cost difference adjustments come from differences in housing costs. The first obvious point is that housing is a crucial aspect of any discussion of inequality. The second, but less obvious point,  is that these differences are massive barriers to migration within the United States and the poorest are those for whom these barriers are the heaviest. Unfortunately, the high-cost areas are also high-productivity areas (New York, San Francisco for example) whose high costs are largely the result of restrictions on the supply of housing. This means that high-productivity areas – which would raise the wages of low-skilled and low -income workers are inaccessible to them. It also means that those who were present before the increase in productivity of these areas capitalized the gains in more valuable real estates (even if this means lower real incomes).

In this light, the geographic reallocation of the bottom 10% is consistent with an emerging literature that argues that inequality is in great a result of housing policy (see notably Rognlie’s reply to Piketty in the Brookings Papers).  This small modification (I consider it small) that me and Youcef made has important logical ramifications.

On the CityLab blog, Richard Florida posted a piece pointing out that gentrification has virtually no effects on homeowners. I can buy that result, especially since I wrote a policy piece for a think tank back in the summer of 2016 on the issue. The important point that Florida underlines (by citing a paper by Martin and Beck in Urban Affairs Review) is that homeowners are not being displaced, but renters are more likely to be. This will probably fuel some people who are concerned about inequality. I disagree.

I want to point out that my interest in the issue is entirely related to the issue of inequality which some individuals have tried to tie to gentrification (sometimes without understanding that causality can run both ways). If you want to tie the two issues together, then you must realize that there are four “types” of gentrification. First of all, gentrification always appear in an area that is poor and it is always a result of a shift in demand for land in that area. However, that area can be largely unoccupied or heavily inhabited. It can also be in a district where zoning is lax or burdensome. In each of these situations, you will different effects with different interpretations for inequality.

These four scenarios are important because they show something important that some people have to understand. Gentrification can increase inequality. However, that depends on the context and the institutions (zoning) surrounding the area in which it happens. In all cases, gentrification is a normal process that can’t really be stopped but turns sour because of zoning laws. Thus, if you really want to tie gentrification to inequality, it should twice removed since the first parents are zoning laws and construction limits.