Short Story #1: The Old Wizard. Once upon a time, a group of teenagers was bored in the residential zone of Toronto. After discussing their options for a while, they decided to break into their local, quasi-abandoned library. While exploring the DVD rental section, one of them picked up a dusty, old copy of House on Haunted Hill. Then, mysteriously, the whole room began to shake, and a secret door appeared. On the door, were the words “KEEP OUT”, written in blood. The teens decided to investigate.

Using their phone flashlights to navigate the passageway, the came across a cavernous room with a mysterious spotlight shining down the middle. It was shining on a very large, very old, and very mysterious book. It was more of a tome, really. Beneath the dust and the mould, the cover was decorated with a skull and crossbones. (There were also skeletons scattered around the room, but naturally, the teens were more interested in examining the tome.) When they opened the book, a hundred bats flew right out off the pages.

It was obvious this was no ordinary book. This was a text on the dark arts, the undead, and forbidden secrets. They had stumbled upon an ancient necronomicon.

They flipped through the dusty, dry pages of the book, and saw a section with a picture of a man with a long beard, looking angrily at a bunch of houses. There was some cryptic text underneath the pictures, which the teens decided to read outloud. “Summoni, vexipelli, albinocapo!” Thunder clapped in the distance. “Domum, habituum, nimbium!”  accidentally awoke a powerful wizard.

“My name is Eauldivo the Old!” The wizard stretched and roared. “For a thousand years I laid dormant,” he grumbled, quite evilly. “Who dares disturb my slumber?!”

The teens were wide-eyed and shocked at what they were seeing. Finally, one of them manages to mutter out, “W-w-w-we did, sir! We are just a group of local teens, who recently moved to the city. We’re just exploring this neighbourhood”

“Recently moved?!” The wizard was really angry now. “When I fell asleep a millennium ago, there was no such thing as moving! People lived and died where they were born, and they liked it. This is too much change; and it’s happened much too quickly!”

In a fit of rage, he casts a spell that magically makes half of the 1.2 million dwellings in Toronto disappear into thin air!

The wizard wasn’t totally evil, though: not only does he spare the lives of the people who lived in these ex-homes, he also magically fills up their bank accounts with what would have been the market value of their homes. Now they have to find somewhere new to live.

Suddenly, 600,000 households are on the market to find a new place to live immediately. They also have a lot of money to buy. Since this is more than ten times the number of new residents that move into the city per year, they are eager to buy whatever they can, at whatever price they can.

Since obviously there aren’t enough homes for everyone to live in the city now that the wizard has vaporized half the homes, people are going to have to live further away. They have to commute further to get to work, to see their friends, go to nice restaurants, or attend the universities. Because of this, many people who had to move further away don’t want to work in or visit the city anymore. That means fewer customers for restaurants, fewer employees for businesses, and fewer students at universities. This made a lot of people sad.

With fewer homes in the city, fewer people were happy. All because of those meddling teens, and Eauldivo the Wizard. If only the Wizard hadn’t acted, then more homes would be available for more people to live, work, learn, and play in the city!

Short Story #2: The Boumers and the Zoumers. Imagine a town called Homesville. Located on a picturesque waterfront, Homesville is a small, quiet largely residential area. As a relatively stable community, there is only one house for sale in Homesville: a bungalow (needing some repair) owned by an octogenarian named Ozzy. Ozzy is looking to sell his home to buy a boat and fulfill his dream of sailing around the world. Ozzy has a minimum price that he’s willing to sell at. He will happily accept any price above the minimum, but will never sell below it. Let’s say that his minimum price is $200,000.

Zack and Zoey Zoumer are a young couple looking to make Homesville their home. Zack was recently offered a job at the new tech company in town called Homestech, and Zoey is pregnant with their first child. They have a budget of $500,000, so Ozzy’s cute bungalow would be the perfect home for them. And well under budget, too!

Unfortunately for the Zoumers, they’re not the only couple looking to move in to town. Bill and Beatrice Boumer are looking for a place to retire. It’s always been their dream to take up gardening, so the Boumers are looking for a home that can support their lifestyle. Ozzy’s bungalow will be the perfect opportunity to plant a garden that can sustain the exotic herbs that will only grow in Homesville. They’ve worked hard for many years, and have a considerable savings built up. Their budget for a home is $700,000.

In the open market, who would get Ozzy’s house, and for how much? Since Ozzy’s house is the only property available for sale, and that there are two potential buyers, we can expect a bidding war. Can we predict who will win out? Yes: for any price below $500,000, the Boumers and Zoumers can outbid each other. But once the Boumers bid above $500,000, the Zoumers can no longer keep up. So the Boumers will win the bidding war, and will pay somewhere between $500,000 (the maximum price the Zoumer’s could bid) and $700,000 (their own maximum).

After the dust settles, the Boumers paid $600,000 for the home. Since this is the only home in the market, we can say the “average price” in Homesville is $600,000. And at this price, housing here is too expensive for at least one family to find the town affordable.

Feeling defeated, the Zoumers think they’re out of luck about living in Homesville. But a strong gale off the water throws at their feet a shiny piece of paper that says “Delly” on it. It’s a flyer for a new condo development opening downtown. The flyer looks old though, so Zack and Zoey aren’t sure if there are any more condos left to buy.

When they arrive at the Delly sales office, the agent tells them they’re in luck: there’s one condo available for sale. As it is a luxury condo on the top floor, the unit is a bit pricey: $300,000. But while Zack is looking at the balcony, he sees the Homestech office is just across the street! That settles it. He and Zoey buy the home. The new luxury condo allowed Zack and Zoey to start their new lives together in Homesville after all. 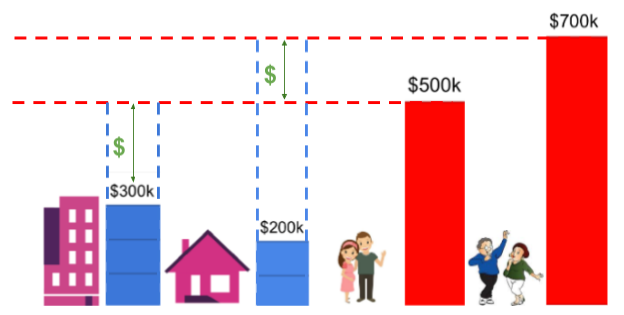 By adding a new luxury condo to the Homesville market, Delly Developments actually both lowered prices and made housing more abundant. The more housing is available to buy, the more opportunities for more people to live in an area at a lower price!

(To see this story told with more pictures, see our earlier blog post on this topic.)

rapper Drake is out for a leisurely stroll on the streets of his home town. Listening to his own songs on a new pair of custom AirPods, Drake gets mesmerized by the latest podcast featuring Alain Bertaud, the famed urban planner. Drake has recently developed an interest in urbanization.

Suddenly, the batteries in his headphones run out. Drake opens his eyes to realize that he’s in a part of “the 6” that even he isn’t familiar with. Looking around, he sees an old woman emerge from the shadows of a laneway house. “Sorry, ma’am, but I’m lost here. Can you point me towards Yonge Street?”

The old woman lets out a sinister cackle. “I’ll tell you what, Drizzy. If you give me those custom AirPods you’re wearing, I’ll not only tell you where to find the longest street in the world….” She paused to reach for something deep in her winter jacket. “I’ll give you these magical beans, too. The magic is that they teach you housing economics.”

Drake looked at the woman with consternation. He was not expecting to bargain his personal belongings to get directions. But then he remembered the last song he was listening to, before his headphones died. “You only live once, right? That’s the motto. You’ve got a deal, lady.” The old woman smiled as Drake handed over his AirPods, and as she gave him the beans she let out a shriek of laughter, even more sinister than before. It startled Drake. “What is so amusing, madam?”

“Look around, Drizzy! You’ve been on Yonge Street this whole time. Enjoy your beans!” And in a cloud of smoke, she fell into the shadows as her cackle mysteriously faded away.

Drake was mad that he got swindled. On his walk home, he angrily threw the beans into the empty plot of land next door. He had recently purchased the lot and had gotten approval from the city to build a mixed-use building, that would have both a recording studio, as well as a couple apartments for his musician friends to stay in when visiting from out of town. He was going to call it the DrizzyPlex.

The next day, Drake was not so angry. After opening his curtains, he was in shock. There, in what was an empty plot of land just the night before, was a fully built condo tower that soared into the heavens. It was so tall that it went past the clouds. A crowd had gathered nearby, marvelling at the spectacle. Drake went in to the building to inspect it. It was a marvelous building, with marble pillars, granite floors, and even a recording studio.

After inspecting some more, Drake and the city safety department discovered that the elevators will, virtually instantly, take anyone up to one of 10,000 floors, each of which has 60 luxury 2 bedroom condos in it. Seeing the miracle of the situation, Drake could only conclude that this was, indeed, God’s Plan. And, like his number 1 music video, he offered to give away the 600,000 units for free.

Not everyone was happy about this. All the people who were trying to sell their old, boring, homes for money now had to compete with these new Drake homes that people got for zero money. Because of Drake, housing prices had to come down in dramatic fashion.

But many more people were happy. Not only did 600,000 families get a home for free, but for many years to come, housing prices remained low in the city, which allowed more people to move in for cheap. This increase in population led to more Drake fans, more sales of Drake merchandise, and also more people who could start businesses, patronize local shops, work in the city, and make new friends, new lovers, and start new families.

For a more detailed analysis of the issues covered here, see our new report on Rethinking the Yellowbelt.

One thought on “Three Short Stories on Housing Economics”