Skip to content
HomeSunday Poetry: Gender Equality where it matters? The Scandinavian Unexceptionalism

Deja-Vu! Social Democrats once again bring up the topic of “Democratic Socialism” to cure all of the evils of the world. Once again, the Scandinavian countries (Sweden, Finnland, Denmark and Norway) are used as an example of how “a third way Socialism” can work. Although I still would consider myself young, I have already lost all of my stamina to engage in the same debates all over again until they pop up again a few months after.

So, instead of pointing out the fallacy in labelling the Scandinavian countries moderately socialist (Nima Sanandaji, for example, does an excellent job in doing so), I want to look at one aspect in particular: The myth of peak emancipation of woman in the labour market in these countries. So apologies for neglecting Poetry once again for the sake of interesting information. Have a look at the following graphic and the remarks by Sanandaji:

“Some boards in Nordic nations are actively engaged in how the companies they represent are run. Others have a more supervisory nature, meeting a few times a year to oversee the work of the management. The select few individuals who occupy board positions – many of whom reach this position after careers in politics, academia and other non-business sectors – have prestigious jobs. They are, however, not representative of those taking the main decisions in the business sector. The important decisions are instead taken by executives and directors. Typically individuals only reach a high managerial position in the private sector after having worked for a long time in that sector or successfully started or expanded a firm as an entrepreneur. The share of women to reach executive and director positions is the best proxy for women’s success in the business world. Eurostat has gathered data for the share of women among ‘directors and chief executives’ in various European countries between 2008 and 2010. The data show that Nordic nations all have low levels of women at the top of businesses. In Denmark and Sweden, only one out of ten directors and chief executives in the business world are women. Finland and the UK fare slightly better. Those Central and Eastern European countries for which data exist have much higher representation. 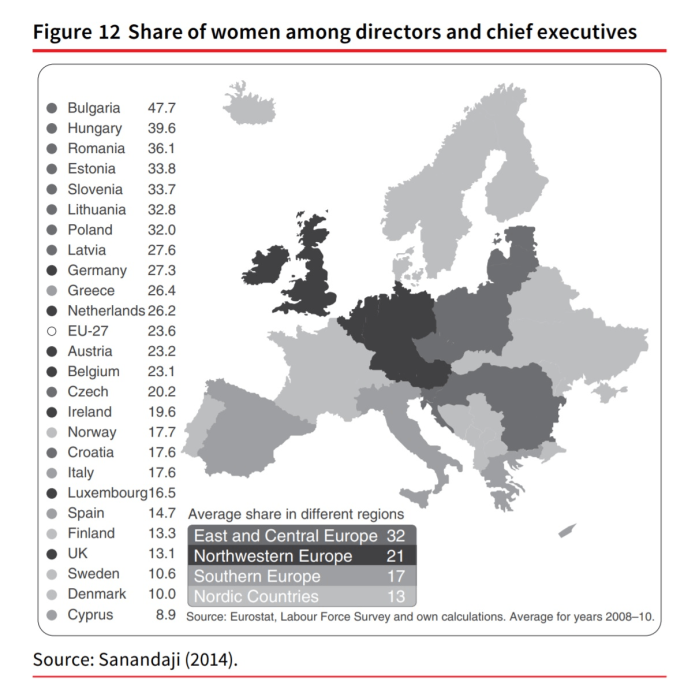 A key explanation lies in the nature of the welfare state. In Scandinavia, female-dominated sectors such as health care and education are mainly run by the public sector.
A study from the Nordic Innovation Centre (2007: 12–13) concludes: Nearly 50 per cent of all women employees in Denmark are employed in the public sector. Compared to the male counterpart where just above 15 per cent are employed in the public sector. This difference alone can explain some of the gender gap with respect to entrepreneurship. The same story is prevalent in Sweden. The lack of competition reduces long-term productivity growth and overall levels of pay in the female-dominated public sector. It also combines with union wage-setting to create a situation where individual hard work is not rewarded significantly: wages are flat and wage rises follow seniority, according to labour union contracts, rather than individual achievement. Women in Scandinavia can, of course, become managers within the public sector, but the opportunities for individual career paths, and certainly for entrepreneurship, are typically more limited compared within the private sector.

If you are interested in the whole book, it is completely available online for free.

I wish you all a pleasant Sunday.