Skip to content
HomeNGDP 3% per year; NGO much less!

A few days ago, Scott Sumner blogged about the “new normal” of NGDP trend (3% a year) (here and here). Overall, I tend to agree with him that the aggregate nominal expenditures are now at a new and historically low trend growth rate. I think that he is way too optimistic!

As readers of this blog are aware, I am not convinced that NGDP is the proper proxy for nominal expenditures. I believe that Nominal Gross Output (NGO) is a better proxy as it captures more goods and services traded at the intermediate level (see blog posts here, here and here).  The core of my argument is that NGO will capture many “time to build” problems that will not appear in GDP as well as capture intangible investments which are now classified otherwise (see literature on intangible investment as capital goods here).  Thus, my claim that NGO captures more expenditures (especially between businesses). (Note: I am in the process with some colleagues of finalizing a paper on the superior case for NGO – more on this later.)

Are we at a new normal point where growth in nominal expenditures is slower than in the past? Yes! But according to Sumner and others, this is 3%. If we use NGO we are much lower! Again, using the FRED dataset, here is the evolution of NGO and NGDP since January 2005 (the start date of the NGO series in a quarterly form). The graph shows something odd starting in mid-2014 : NGO is growing much more slowly.

To see this better, let’s plot the evolution of NGO as a percentage of NGDP in the graph below. If the ratio remains stable, then the trend is similar for both. As one can see, the recession saw a much more pronounced fall of NGO than NGDP with a failure to return to the initial levels. And since 2014, the ratio has started to fall again (indicating slower growth of NGO than NGDP).

So what is happening? Why is there such a difference? I am not one hundred percent sure about the causes of this difference. However, I am willing to contend that NGO is fitting better than NGDP with other indicators indicating a tepid recovery. If we look at the labor force participation rate in the US, it continues to fall in a nearly mechanical manner. Fewer and fewer workers are at work (or looking for work) in comparison to the population that could be working while investments are disappointing. 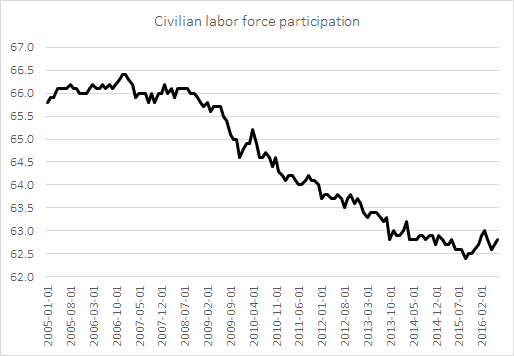 Maybe Scott Sumner is being overly optimistic. The new trend might simply be substantially lower than he believes.*

*Readers should note that I believe that monetary policy is, at present, too restrictive. However, I believe the culprit is not the Federal Reserve but financial regulations that restrict the circulation of “private money” (the other components of broad money found in divisia indices – see my blog post here).