Skip to content
HomeNGO v. NGDP: In reply to Nunes and Sumner

A week ago, I initiated a discussion on using another indicator of nominal spending instead of NGDP when the time comes to set monetary policy. My claim was that NGDP includes only final goods and as a result, it misses numerous business-to-business transactions. This means that NGDP would not be the best indicator. I propose a shift to a measure that would capture some intermediate transactions.

The result was a response by Nick Rowe (to which I did respond), Matt Rognlie, Marcus Nunes and Scott Sumner (to whom I am responding now). Nunes and Sumner are particularly skeptical of my claim. I am providing a first response here (and I am attempting to expand it for a working paper).

The case against NGDP

GDP has important shortcomings. First of all, thanks to the work of Prescott and McGrattan (2012 : 115-154), we know that a sizable part of capital goods acquisition fails to be included inside GDP. That sizable part is “intangible capital” which Prescott and McGrattan define as the “accumulated know-how from investing in research and development, brands, and organizations which is the most part expensed rather than capitalized” (p.116).  Yet, investments in research and development are – in pure theoretical terms – like the acquisition of capital goods. However, national accounts exclude those. Once they’re included in papers like those of Prescott and McGrattan and those of Corrado, Hulten and Sichel (2009), increases in productivity were faster prior to 2008 and that the collapse after 2008 was much more pronounced.  In addition, this form of capital is increasing much faster than tangible so that its share of the total capital stock increases. Thus, the error of not capturing this form of capital good investment is actually growing over time causing us to miss both the level and the trend.

A second shortcoming of importance is the role of time in production. Now, just the utterance of these words makes me sound like an Austrian. Yet, this point is very neoclassical since it relies on the time to build approach. In the time-to-build model of the real business cycle approach, production occurs over many periods. Thus changes in monetary policy may have some persistence.  The time-to-build model proposes that firms undertake long projects and consume more inputs. In terms of overall transactions, this will mean more and more business to business (B2B) transactions.  Hence if an easy monetary policy is inciting individuals to expand their number of projects that have more distant maturities, then a focus on GDP won’t capture the distortionary effects of that policy through. Similarly, if monetary policy tightens (either directly as a fall of the money supply or through an uncompensated change in velocity), the drop in economic activity as projects are closed down will not equally well captured. While this point was initially advanced by Kyland and Prescott (1982), some Austrians economists have taken up the issue (Montgomery 1995a; 1995b; 2006; Wainhouse 1984; Mulligan 2010), several neoclassicals have also taken it up (Kühn 2007; Kalouptsidi 2014; Kyland, Rupert, Sustek, 2014).

Why shift to another measure

My contention is that NGO (Nominal Gross Output) allows us to solve a part of that problem. First of all, NGO is more likely to capture a large share of the intangible capital part since, as a statistic, it does not concern itself with double counting. Hence, most of the intangible capital expenses are captured. Secondly, it also captures the time-to-build problem by virtue of capturing inputs being reallocated to the production of projects with longer maturities.

Thus, NGO is a better option because it it tries to capture the structure of production. The intangible capital problem and the time to build problem are both problems of intermediate goods. By capturing those, we get a better approximate idea of the demand for money.

Let me argue my case based on the Yeager-esque assumption that any monetary disequilibrium is a discrepancy between actual and desired money holdings at a given price level. Let me also state the importance of the Cantillon effects whereby the point of entry of money is important.

If an injection of money is made through a given sector that leads him to expand his output, the reliability of NGDP will be best if the entry-point predominantly affects final goods industry. If it enters through a sector which desires to spend more on intangible investments or undertake long-term projects, then the effects of that change will not appear as they will merely go unmeasured. They will nonetheless exist. Eventually firms will realize that they took credit for these projects for which the increased output did not meet any demand. The result is that they have to contract their output by a sizable margin. In that case, they will abandon those activities (imagine unfinished skyscrapers or jettisoned research projects).

The recurring criticism in most posts is that NGO is volatile over the period when the data is available (2005Q1-today). True, the average growth rate of NGO is the same as NGDP over the same period, but the standard deviation is nearly twice that of NGDP. However if you exclude the initial shock of the recession, the standard deviations converge. In a way, all the difference in volatility between the two series is driven by the shock of the recession. Another way to see it is to recompute two graphs. One is an imitation of the graphs by Nunes where NGDP growth in period T is compared with growth in the period T minus 1, but we add NGO. The second is the ratio of NGO to NGDP.

As one can see from the first figure, NGO and NGDP show the same relation except for a cluster of points at the bottom for NGO. All of those lower points are related to the drop from the initial recession. All concentrated at the bottom. This suggests that the recession had a much deeper effect than otherwise believed. The second graph allows us to see it. 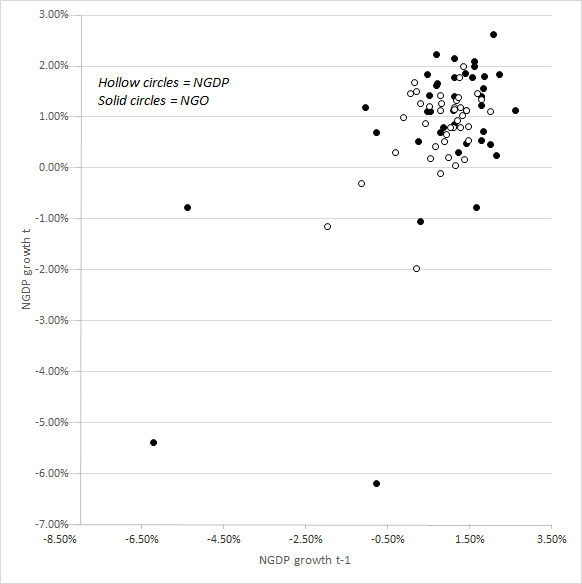 The ratio of NGO to NGDP shows that the two evolved roughly the same way over the period before the recession. However, when the recession hit, the drop was more important and the ratio never recovered!  This suggest a much deeper deviation from the long-term trend of nominal spending which is not seen at the final level but would be seen rather in the undertaking of long-term projects and the formation of intangible capital (the areas that NGDP cannot easily capture). 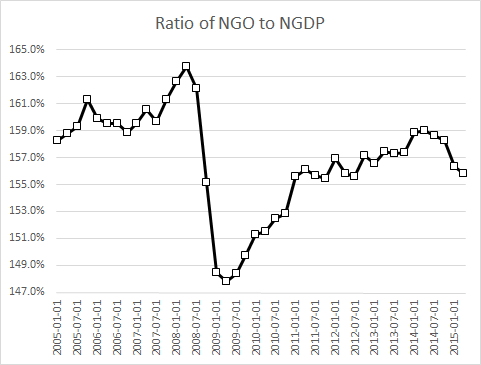 In his reply to Nick Rowe, Matt Rognlie states that the more important fall of NGO is explained by changes in relative prices. Although his transformation shows this, the BEA disagrees. Here is the explanation provided by the BEA:

One thought on “NGO v. NGDP: In reply to Nunes and Sumner”