Skip to content
HomeWhy farms die and should die

In Canada, I have the frustrating habit of criticizing government support to the agricultural sector especially entry-barriers in the form of production quotas. Most of those policies are regressive in the sense that they reallocate income from the poorest to the richest. In fact, their entire aim is to artificially increase the income of farmers (especially dairy and poultry farmers) at the expense of the rest of the population. However, when lobbyists for these subsidies come out in public, they do so under different disguises. Their favorite? Farms are dying.

In each radio debate where that boogeyman is raised, I reply that “yes, they are dying and its a good thing”. If we can feed more and more people with less and less farmers using less and less land, that’s a good thing. In fact, it’s the greatest thing that happened in economic history. Less two centuries ago, 90% of the workers in some western economies were involved in agricultural activities. Today, that proportion has fallen to less than 1.5%. Thousands of farms disappeared, we liberated millions of acres of land to return to their natural state and in the process, we became rich and well-fed!

In testimony of this fact, which is my favorite economic history fact, I decided to recompute a graph by Mark Perry of the American Enterprise Institute but I added the GDP per capita figures for the same period (1790 to 2013). 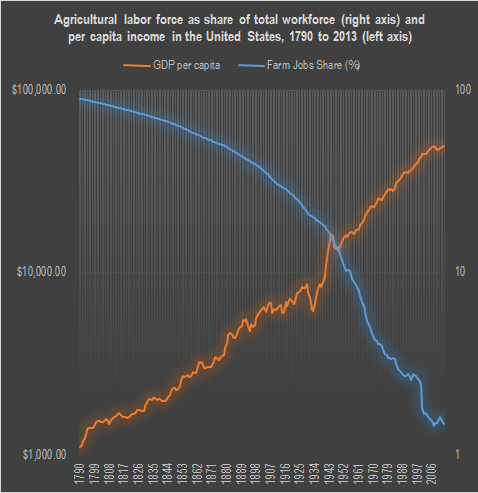 Yes, let the farms die. Let the most productive stay in the fields and let them feed humanity while the others become engineers, doctors, teachers, businessmen, welders, carpenters or whatever trade they are best at!

7 thoughts on “Why farms die and should die”