Following my Mr. Darcy piece that outlined the use and convenience of British government debt instruments in the eighteenth (and predominantly the nineteenth) century, I thought to extend the discussion to two particular financial instruments. In addition to the Consols (homogenous, tradeable perpetual government debt) that formed the center of public finance – and whose active secondary market that made them so popular as savings devices – the Bill of Exchange was the prime instrument used by merchants for financing trade and settling debts.

The complementarity of the Consol and the Bill in international finance, roughly from the South Sea Bubble (1720) to the end of Napoleon (1815), was the “secret of success for international finance” (Neal 2015: 101) and arose without an overarching plan, i.e. rather spontaneously. As the Consol is more easily understood for a modern reader, and the Bill is both more ancient and less well understood, I’ll focus the bulk of my attention on the latter.

According to Anderson (1970: 90), the Bill constituted “a decisive turning-point in the development of the English credit system,” but is much older than that. In practice, it was a paper indicating debt and a time for repayment, allowing financing of current trade. Cameron (1967:19) writes that the Bill

was far more ancient than either the banknote or the demand deposit; it had been developed in the Middle Ages. At first the bill was used as a device for avoiding the cost and risks of shipping coin or bullion over great distances, then as a credit instrument which circumvented the Church’s prohibition of usury. When it first came to be used as a means of current payment is a moot question that may never be answered, but that it was so used in eighteenth-century England is beyond doubt.

The Bill was predominantly used in coastal cities in the Mediterranean and around the North-Sea, becoming frequent perhaps in the 1700s. One observer even dates an early instance of its use to 1161, and it was of standard use among traveling traders, merchants and brokers throughout the Middle Ages (Cassis & Cottrell 2015: 12). Occasionally – warranting a discussion of its own – Bills in England became “so widespread that they drove out even banknotes” (Cameron 1967: 19).

There is an unfitting competition among financial historians as to who can produce the most persuasive, informative or complicated schedule for how Bills worked (I know of at least four similar, yet uncredited, renditions). Here’s Anthony Hotson’s (2017: 92) attempt from last year: 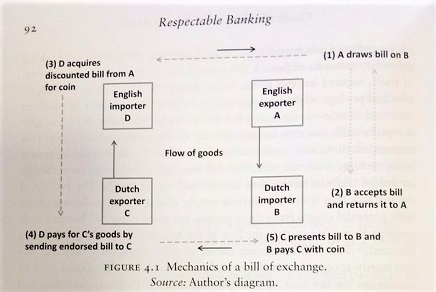 This venture can – and usually was – made infinitely more complicated; we can add brokers and discounting banks in every transaction between Andrew, Bas, Dave and Cremer, as well as a number of endorsers and re-discounters. In his popular book Exorbitant Privilege, Barry Eichengreen recounts a 12-step, several-pages long account for how a U.S. importer of coffee and his Brazilian supplier both get credit and signed papers from their local (New York + Brazil) banks, how both banks send their endorsed bills to their London correspondent banks, and some investor in the London money markets purchase (and perhaps re-sell) the Bill that eventually settles the transaction between the American coffee importer and the Brazilian farmer.

Although it might sound excessive, complicated and impossible to overlook, the entire process simplified business for everyone involved – and allowed business that otherwise couldn’t have been done. In econo-speak, the Bill of Exchange set within a globalizing financial system, extended the market for merchants and farmers and customers alike, lowered transaction costs and solved information asymmetries so that trade could take place.

Turning to the opposite end of the maturity spectrum, the Consol as a perpetual debt by the government was never intended to be repaid. Having a large secondary market of identical instruments, allowed investors or financial traders everywhere to pass Gorton’s No-Questions-Asked criteria for trade. A larger market for government debt, such as after Britain’s wars in the late-1700s and early 1800s, allowed dealers in financial markets to a) be reasonably certain that they could instantly re-sell the instrument when in need of cash, and b) quickly and effortlessly identify it. These aspects contributed to traders applying a smaller risk premium to the instrument and to be much more willing to hold it.

While the Bills were the opposite of Consols in terms of homogeniety (they all consisted of different originators, traders, and commodities), there developed specialized dealers known as Discount Houses whose task it was to assess, buy, and sell Bills available (Battilosso 2016: 223). Essentially, they became the credit rating institutions of the early modern age.

Together these two instruments, the Bills of Exchange and the Consols, laid the foundations for the modern financial capitalism that develops out of the Amsterdam-London nexus of international finance.