In light of what we see today, this is hard to believe. However, as a result of Castro’s death, I accidentally became interested in the history of this fascinating island and the more I discover, the more shocked I am at “the path” that Cuba has taken. One of these reasons is provided below by Victor Bulmer Thomas in his Economic History of Latin America since Independence. Now, Thomas uses a different approach than the commonly used Maddison data (he believes the assumptions are too heroic). He uses indicators correlated with GDP per capita to fill in the gaps and he finds that Cuba was generally richer than the United States for most of the 19th century (see below):

Now, I am not convinced by the figure Thomas presents. However, I am also skeptical of the levels presented by Maddison (where Cuba is roughly 60% as rich as the US in 1820). In between are some more reasonable estimate (see this great discussion in this book as well as this discussion by Coatsworth).  Moreover, there is the  issue of slavery which distorts the value of using GDP per capita because of high levels of inequality (however, it distorts both ways since the US was also a slave economy up to the Civil War).

Nonetheless, this tells you about the “path not taken” by Cuba.

Among the great economic historians is Leandro Prados de la Escosura. Why? Because, before venturing in massively complex explanations to explain academic puzzles, he tries to make sure the data is actually geared towards actually testing the theory. That attracts my respect (probably because it’s what I do as well which implies a confirmation bias on my part). Its also why I feel that I must share his most recent work which is basically a recalculation of the GDP of Spain.

The most important I see from his work is that the recomputation portrays Spain as a less poor place than we have been led to believe – throughout the era. To show how much, I recomputed the Maddison data for Spain and compared it with incomes for the United Kingdom and compared it Leandro’s estimates for Spain relative to those for Britain (the two methods are very similar thus they seem like mirrors at different levels). The figure below emerges (on a log scale for the ratio in percentage points). As one can see, Spain is much closer to Britain than we are led to believe throughout the 19th century and the early 20th century. Moreover, with Leandro’s corrections, Spain convergence towards Britain from the end of the Civil War to today is very impressive. 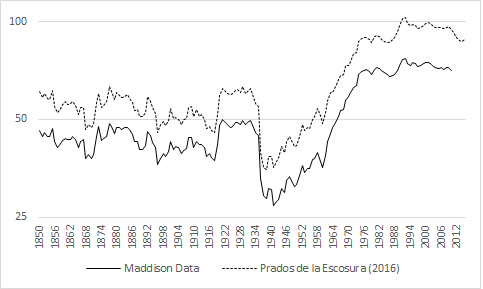 The only depressing thing I see from Leandro’s work is that Spain’s productivity (GDP / hours worked) seems to have stagnated since the mid-1980s. 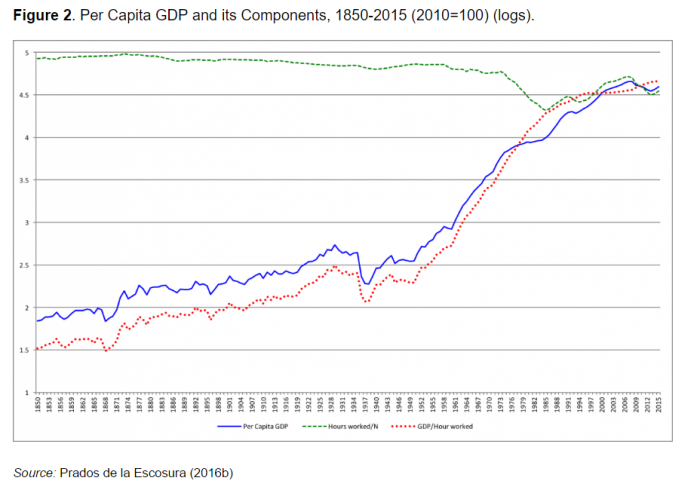 I am a weird bird. I get excited at weird things. I get excited at reading economics and history papers (and books). I get particularly excited when I read papers and books that “get the data right”. This is because I believe that most theoretical debates in economics stem from poor data forcing us to develop grandiose theories or very advanced models to explain simple things. One example of that is the work of Joshua Hendrickson who argued that monetary aggregates (M1, M2 etc.) are not necessarily perfect indicators of money. However, these aggregates were used in statistical tests and generated strange results inconsistent with theory. This issue has been the cause of many debates. Josh stepped in and said that we just had a variable that was not created to measure what the theory said. Using broader measures of money, he found the results consistent with theory. The debates were driven by poor data (as I think is the case in issues over fiscal multipliers, crowding-out and business cycles).

Thus, I am always excited to see data work that “get things right”. One recent example that adds to cases like that of Hendrickson is Peter Lindert’s working paper at the National Bureau of Economic Researcher. Now, before I proceed, I must state that I am very partial to Lindert as he has been a big supporter of my own research and has volunteered important quantities of his time to helping me move forward. Thus, I have a favorable bias towards Lindert (and his partner in crime, Jeffrey Williamson).  Nonetheless, his working paper requires a discussion because it “gets prices right”.

The essence of his new working paper is that our GDP per capita estimates prior to 1914 may overestimate divergence between countries over time.

Generally, when we measure GDP, we try to derive “volume indexes” that measure quantities produced at a fixed vector of prices. For example, when I measured Canadian economic growth from 1688 to 1790 (I am submitting it in a few weeks), I took the quantities of grain reported in censuses and weighed them by prices for a fixed year. This is a good approach for measuring productivity (changes in quantities). Nonetheless, there are issues when you try to move this method over a very long period in time. The prices may become unrepresentative.  So you get time-related distortions. Add to this that all the time-related distortions may be different over space. After all, should we believe the relative price of wheat to oats in 1910 was the same in Canada as it was in Russia?  Variations in relative prices over space will affect this issue. Basically, you juxtapose these two types of distortions when trying to measure GDP per capita over centuries and you may end up so far in the left field that you’re in fact in the right field.

In his working paper, Lindert tried to adjust for those problems by moving to prices that were more representative. The approach he used is basically the one used by Robert Allen in his work on the Great Divergence. You create a bundle of goods that capture the cost of living in different regions – a basic bundle of goods. This generates purchasing power parities. From there, he recomputed incomes per capita with these measures prior to 1914. The results are striking: there is much more divergence between Europe and Asia that commonly proposed and the United States are much richer than otherwise believed (and were more richer very early on – as far back as the colonial era).

Now, why does this matter?

Well, consider the debate on convergence. Many scholars have been unimpressed by the level of income convergence across countries (at least until the 1980s). However, Lindert’s estimates suggest that the starting point was well below what we think it was. In a way, what this is telling us is that many puzzles regarding the “catching-up” of poor countries may be simply related to poor data. Imagine, for a second, that we could redo what Lindert did with many more countries at a higher time frequency. What would this tell us? Imagine also that this new data would confirm Lindert’s point, what would that entail for those entangled in debates over development?

Basically, what I am saying is this: most of our debates often stem from poor data. If a simple (and theoretically sound) correction can eliminate the puzzles, maybe our task as economists should be to stop bickering over advanced theory and make sure the data is actually geared towards testing our theories!