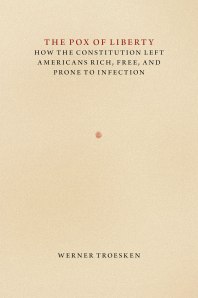 A few weeks ago, I finished reading the Pox of Liberty authored by Werner Troesken. Although I know some of his co-authors personally (notably the always helpful Nicola Tynan whose work on water economics needs to be read by everyone serious in the field of economic history – see her work on London here), I never met Troesken. Nonetheless, I am what you could call a “big fan” in the sense that I get a tingling feeling in my brain when I start reading his stuff. This is because Troesken’s work is always original. For example, his work on the economic history of public utilities (gas and electricity) in the United States is probably one of the most straightforward application of industrial organization to historical questions and, in the process, it kills many historical myths regarding public utilities. The Pox of Liberty is no exception and it should be read (at the risk of become a fan of Troesken like I am) as a treatise on the political economy of public health.

Very often, it will be pointed out that public health measures are public goods that government should provide lest it be “underprovided” if left to private actors. After all, it is rare to hear of individuals who voluntarily quarantined themselves upon learning they were sick. As a result, the “public economics” argument is that the government should mandate certain measures (mandatory vaccination and quarantine) that will reduce infectious diseases. Normally, the story would end there. And to be sure, there is a lot of evidence that mild coercive measures do reduce some forms of mortality (mandatory vaccination and quarantine). The more intense the policies, the larger the positive effects on health outcomes. For example, taxes on cigarettes do reduce consumption of cigarettes and thus, secondhand smoke. In fact, even extreme coercive measures like smoking bans seem to yield improvements in terms of public health (another example is that of Cuba which I discussed on this blog).

However, Troesken’s contribution is to tell us that the story does not end there. In a way, the “public economics” story is incomplete. The institutions that are best able to deploy such levels of coercion are generally also the institutions that are unable to restrain political meddling in economic affairs. Governments that are able to easily deploy coercive measures are governments that tend to be less constrained and they can fall prey to rent-seeking and regulatory capture. They will also tend to disregard property rights and economic freedom. This implies slower rates of economic growth. As a result, there is a trade-off that exists: either you get fast economic growth with higher rates of certain infectious diseases or you get slow economic growth with lower rates of certain infectious diseases (Troesken concentrates mostly on smallpox and yellow fever). The graphic below illustrates this point of Troesken. Countries like Germany – with its strong centralizing Prussian tradition – were able to generate very low levels of deaths from infectious diseases. But, they were poorer than the United States. The latter country had a constitutional framework that limited the ability of local and state governments to adopt even mild measures like mandatory vaccination. Thus, that meant higher mortality levels but the same constitutional constraints permitted economic growth and thus the higher level of living standards enjoyed by Americans relative to the Germans. 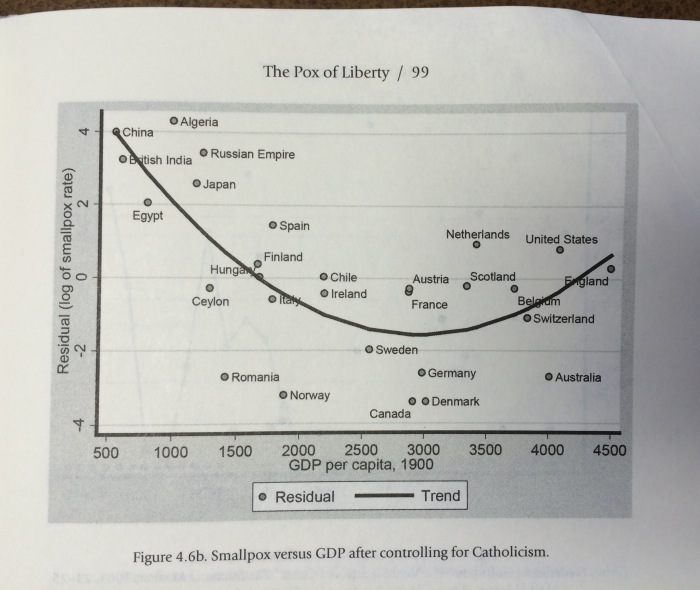 But Troesken’s story does not end there.  Economic growth has some palliative health effects (in part the McKeown hypothesis*) whereby we have a better food supply and access to better housing or less demanding jobs. However, in the long-run economic growth means that new sectors of activity can emerge. For example, as we grow richer, we can probably expend more resources on drugs research to extend life expectancy. We can also have access to more medical care in general.  These fruits take some time to materialize as they grow more slowly. Nonetheless, they do form a palliative effect that contributes to health improvements.

However, there is an analogy that allows us to see why these palliative effects are important in any political economy of public health provision. This analogy relates to forestry. The health outcomes fruits from a “coercive institutional tree” can only be picked once. Once they are picked, the tree will yield no more fruits.  However, the yield from that single harvest is considerable. In comparison, the “economic growth tree” yields fewer and smaller fruits, but it keeps yielding fruits. It never stops yielding fruits. In the long-run, that tree outperforms the other tree. The problem is that you cannot have both trees. If you chose one, you can’t have the other.

In this light, public health issues become incredibly harder to decipher and understand. However, we can see a much richer wealth of information under this light. In writing the Pox of Liberty, Troesken is enlightening and anyone doing health economics should read (and absorb his work) as it is the first comprehensive treatise of the political economy of public health.

* I should note that I think that the McKeown hypothesis is often unfairly lambasted and although I have some reservations myself, it can be adapted to fit within a wider theoretical approach regarding institutions – like Troesken does.