Skip to content
HomeLanguage and Informational Prisons: The Case of Arabic

What language you are born into matters. It matters because it’s a means of communication and it matters even more because it’s a kind of soft prison. I regularly turn off the French language media because I become cumulatively irritated at the number of absurd statements I hear coming out of the mouths of presumably university-educated French newsmen and newswomen. There are fewer absurd affirmations in the news in this English-speaking country simply because good information is more abundant in English than it is in French.

We are used to believing that whoever is intelligent is also well informed. The reverse, we know, is not true. There are plenty of people who accumulate information and who are perfect fools. The best way I have heard it put is from an anonymous author played recently on my local radio station (KSCO Santa Cruz 1080 AM): Being aware of the fact that a tomato is a fruit is to be well-informed; to abstain from putting tomatoes in a fruit salad is to be wise!

The assumption that intelligent people are automatically well informed is so general that when we come across someone who is obviously intelligent but ill-informed we study him like an infinitely interesting creature. I have known several people like that in my life. They drove me crazy. One I know now, is smarter than I, I suspect but nearly everything he believes to be true is false. My friend has made a philosophical decision not to have any electronic media in his house. He usually carries a book. Over time, I have come to suspect that he does not read very well, that he is dyslexic (whatever that means) or something like that. In general, we don’t think enough of this rare case: The ignorant intelligent person.

What brings forth these musings is an op-ed piece in the Wall Street Journal of 2/17/11 by a Donald Kochan. (“Reading Adam Smith in Arabic.”)

Mr Kochan delivers a tidbit that places the string of revolutions across the Middle-East in a different perspective. I knew about that tidbit; I had even mentioned it in a scholarly paper but it had slipped my mind. Here it is:

Considering the early 80s, for one million Arabs, five books were translated (from any language). For Hungarians, the corresponding figure is 519, or one hundred times more. Let’s bring these numbers to a scale taking into account the absolute numbers of Hungarian speakers and of Arabic speakers. I do this to consider the informational situation of an Arab high-school graduate (from any country) in comparison to that of a Hungarian speaker. There are about 330,000,000 Arabic speakers (Wikipedia says: 360 million but it is pushing the envelope) and only ten million Hungarian speakers.

With these numbers, each Hungarian high-schooler has potentially access to three times more books of foreign origin than his Arab counterpart. I can hear your comments from here: Here they are:

We don’t know what either Hungarians or Arabs read in translation. It could be mostly romance novels on one side, either side, and mostly treaties on political economy on the other side. I understand this, but the fact is that the more different titles, the more likely it is that some are of serious works. And yes, I agree that it would only take one good study to falsify this reasoning. In the meantime, it’s the best that I have, that you have.

Your second objection is probably the cynical one that high-school students don’t read anyway. I am sure that’s true, and college students don’t do much more on the whole. Yet, both kinds of students are exposed to teachers who have read some, while in college in one case, possibly continuously on the other. In his hap-hazard manner, and across an absurdly large number of years of schooling if you think about it, Americans (and other Westerners and the Japanese, and others) acquire a smattering of history, and a smattering of legal principles. They may even capture the essences of the moral and political foundations of liberty. Most Americans may have never read Thomas Paine but they have heard of him. 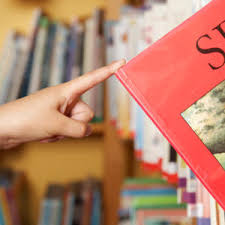 It seems to me that the average Arab student is less likely to have been taught by someone so informed. I know I should not refer to the “average Arab student” because so many things vary across countries where Arabic is the native language. They vary, in particular, in connection with the ability to read in foreign languages. In countries that were deeply colonized, such as Algeria, an instrumental knowledge of one foreign language, French, is practically universal among teachers. In countries where the foreign yoke was light or short-lived, like Egypt, it appears that many members of the middle-class, including teachers, know some English. It’s not clear that this command of English is good enough to be put to the specific use of reading. In other Arab countries that were never administered from Europe, such as Saudi Arabia, you can be almost sure that workable knowledge of any foreign language is scant among high-school teachers.

At any rate, we must consider the Arab world in general as mostly comparatively ill-informed about general ideas that are the foundations of our assumptions in developed, democratic, capitalist countries. I had a brief, recent exposure to this reality.

A couple of weeks ago, I came across a strange item in a Moroccan Facebook I follow regularly for my own reasons. The item was a rumor to the effect that someone in America was printing Korans for the sole purpose of burning them. I tried to interject a more reasonable explanation, namely the growing number of American Muslims and of Islamic schools that require yearly thousands of copies of the Koran. I began my explanation with the remark that I though it was my absolute right to burn any religious scriptures including the Koran. I added that I would not do such a thing because it would be rude (“malpoli”). My purpose was to signal to the Moroccan Facebook readers that one could not count on any American civil authorities to stop the burnings of Korans if any such event did take place.

I expected a torrent or protestations and of insults, possibly some threats. Instead, my message triggered no reaction at all, A couple of days later it had disappeared from the blogosphere. In the meantime, I speculate that my freedom of religion affirmation, the assertion of my right to disrespect religion was so outside the range of the Moroccan Facebook users ‘ understanding of the world that it was literally not understood. Or else, it was treated by all as the statement of an obvious madman. If I am correct, this reaction is especially interesting because the whole conversation was taking place in French and it’s likely that all the participants were young. (I don’t see older Moroccans sitting in Internet cafés communicating with strangers in the un-stylish manner the Internet implies.) Thus, my simple statement was apparently met with incomprehension by what is probably the upper-crust of Moroccan society in terms of familiarity with democratic concepts.

So, I suspect that, to a large extent, what we are witnessing in the Middle-East is not what we are seeing. Rather, it’s something utterly unfamiliar: a democratic revolution by people, many of them intelligent, who may have only a hazy idea of what democracy entails, besides the obvious fact of elections. I am bracing myself for surprises. Yet, I remain sympathetic to the disciplined, astonishingly civilized revolutions of Tunisia and Egypt.

Incidentally, Kochan’s op-ed describes a program of translation of American and other books into Arabic implemented by the State Department through local embassies. In two words: It languishes. Too bad, that is a form of foreign aid that is peaceful and entirely in keeping with the American tradition of enlightenment. If its funding were multiplied by one thousand, its cost would still be paltry. It might even find favor with the firebrand Libertarians who have embarked on a mission to cancel all foreign aid.

7 thoughts on “Language and Informational Prisons: The Case of Arabic”