Skip to content
HomeI Am Bored So Here Is A Story

I am not yet mentally ready to face squarely the fact that the Obama administration is going to do all the wrong things about our dire economy. Let me say again that Pres.-elect Obama is not the Anti-Christ. It’s just that you can’t implement policies the existence of which you don’t even suspect. Obama is a recognizable type. He is a Social-Democrat, European-style, circa 1970.

I am bored with current events. One more time, the Democratic Party has to deal with corruption in its Illinois branch. Reminder: a former Governor of Illinois is currently in jail. Gov. Blago was caught with his hand close to the cookie jar, not even inside. Big deal! The Democratic Party does not want to risk a special election to fill Obama’s Senate seat because of the tiny chance that a Republican might win. Makes me yawn.

The West Europeans are suffering from heating gas delivery cuts in the middle of the winter. Russia is cutting them off. My only reaction: It told you so, in the nineties!

The mayhem is continuing in Gaza. That’s boring too: Some Palestinian group gets up on a hill, pounds its chest, shoots in the direction of Israel with a .22, and promises aloud to obliterate the Zionist entity and to kill many Zionists. The Israelis get pissed off, they return fire with an M16. They kill hundreds of Palestinians; a handful of Israelis die. Then, anti-Semites worldwide join hands with mindless do-gooding tender-hearts and force Israel to stop. Everyone goes home until next time.

Hamas, lying on the sidewalk in a pool of blood, with two broken legs, a skull fracture, and one eye missing declares victory. The Arab world cheers!

A question lazy journalists don’t ask: The current death rate of Gaza residents at the hands of Israel is comparable to the homicide rate of what country? (Relevant blog: Nationamasterblog.)

As I said, I am bored. I don’t seem to be the only one. Today at noon, every major television network showed us an empty room awaiting impeached Gov. Blago to arrive to make a meaningless declaration instead of broadcasting Gaza and surroundings.

You may be bored too so, here is a completely unrelated story.

I grew up on the extreme periphery of Paris proper, where the city is hardly Paris anymore. We lived in government-subsidized housing built in the twenties and thirties on the vacant lots where the city’s old military wall used to stand. There were three classes of buildings. (I am using the word “class” in its proper sociological sense.) The third-class buildings, the most numerous, had no elevators although they were seven stories tall. Incredibly, they had private toilets but no bathrooms. Tenants who wanted hot water had to rig a supply source themselves or heat water on the kitchen stove. Those tenants were members of the traditional blue-collar class; Paris was still an industrial city then. They usually had many children, like devout Catholics, although they voted Communist.

A small number of first-class blocks situated at slightly higher elevation housed store owners and professionals who often worked where they lived and practiced from their apartments: attorneys, doctors, dentists, plus two pharmacists. There was also a sprinkling of executives who might have lived there only because they had played the ponies too enthusiastically. These bourgeois blocks sported elevators and carpeted staircases. (Whatever city architect designed this detail did not understand boys: The carpets were held in place by brass tubes that made first-rate blowguns.)

My family always lived in the second category of apartments, occupied by people who were no richer than the blue-collar workers but who had fewer children and wore ties to work (like my father, a Paris cop assigned to plainclothes service for most of his career). There were five children and only three bedrooms, a small kitchen where we ate, and a dining room/living room where the children would not have dreamed of doing any living. There was no elevator and no carpet in the staircase but we had a bathroom with hot water.

There was a grocery and vegetables store downstairs, at the corner; a whole complement of other kinds of small shops lined up our street. There was also a café across the street, but no youth club or leisure center of any sort. Evenings, in warm weather, kids who had become too old and sophisticated for the park would agglutinate on the sidewalk in front of the café. (Sitting down required buying a beverage which was expensive.) It was a good vantage point from which to survey the flow of everyone coming out of the Metro station three blocks away before it divided into several streams aimed at the several classes of apartment blocks. It was a great spot classlessly (in every sense of the word) to watch lightly clad young women returning from work and to discover which little girls had grown up during the winter.

When I was sixteen, our block was on a social boundary; it shared a street with a block of the third class. On the fourth floor of that block lived a large and highly visible family. They were short and dark. The children seemed to range in age from twelve or thirteen to young adulthood. No one ever knew how many there were. Their last name sounded Italian but with their jet-black hair, their brown complexions and their big eyes, they looked more like Gypsies. Or, maybe, they were part of the contingent of dark Sicilians the Arabs left behind after their hundred-year presence. There were four of five girls I confused with one another because they all looked equally alluring.

My mother, although she had five children to care for, was less overwhelmed than she liked to complain about. She found time to watch the comings and goings from her second-story window. She was never shy about passing judgment on what she observed, especially as concerned “genre.” The word has two meanings. It designates the grammatical gender, of course, but a secondary meaning refers to the deliberate side of personal appearance, with strong social class implications. Thus, a good idiomatic translation for “preppy” would be “bon chic-bon genre.”

My mother occasionally remarked that the Padovani girls had “très mauvais genre.” I think they wore high heels a little earlier than most; their heels were a little higher, their skirts a little shorter, their faces a bit more made up. They appeared to own more outfits than most neighborhood girls, perhaps because between so many sisters, there were numerous opportunities to borrow, swap and mix, and because they knew how to sew (like my mother, actually). 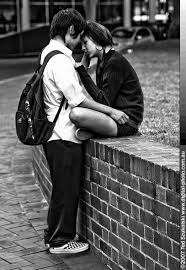 One day, out of nowhere, my mother stated authoritatively that she had seen two of the sisters solicit for tricks in a nearby avenue on a recent evening. I lashed out at her. It was obvious she had seen no such thing. Rather, she had heard a rumor from one of the fat busybodies with whom she gobbled petit-fours on Wednesday afternoons. I thought the girls, with whom I had never exchanged a word, were not hookers but likely, saleswomen, or apprentice hairdressers, in another part of the city. They were just not attending academic high-school like me and most of my friends from the blocks with bathrooms.

This unpleasant incident caused me to pay even more attention to the Padovani girls. I noticed that one of them, who was about my age, was taller and dressed more demurely than the others. She had long legs and was well shaped but not in a way to attract vulgar male attention. Several times, I passed close enough to her to see that she had long, soft eyelashes. Friends of friends told me her name, the Italian-sounding “Michelle.” I became obsessed with her and started looking for her to come out of the Metro in the evening.

This may be hard to believe but then, young French people were shy with strangers of the other sex because the schools were not co-ed. To make things worse, Michelle had several tough-looking older brothers who dressed a little like gangsters. (I did not know any gangsters personally but I did go to the movies.) Moreover, the family’s exotic appearance might have signaled even more exotic forms of tribal protectiveness toward womenfolk’s virtue. How was I supposed to know? I was only sixteen!

Eventually, she was the one who took the initiative to say “Bonsoir,” with a flutter of her long lashes that nearly knocked the wind out of me. We said hello like that for several weeks. Soon, I was in love. In love, not in lust (which happened every other day). I am embarrassed retrospectively to admit that I did not know how to proceed further with the beautiful stranger.

One Sunday evening, in late May, I happened to be outdoors later than usual, around 8:30. It was still daylight, but the streets were empty because it was dinner time. Ahead of me, like a dark poetic apparition, was Michelle sitting alone on a public bench. Precisely because there was no other human being in sight, it would have been totally awkward to pass by her with the mere usual salutation. I said hello and sat down next to her. She smiled brightly and the sluices of conversation opened up, perhaps because we had both been rehearsing that moment for a long time in our minds. (I realized later she must have been lying in wait for me. There was no other plausible reason for her sitting alone in the street at the end of the day. It’s true that I was a little slow.)

She turned out to know my name and more than a little bit about me. We must have talked for an hour at the end of which we felt we knew each other very well. When I kissed her on the mouth, she held my hands in hers because there was still light but she was trembling. She had to be home before dark and I had missed dinner which my father hated with an insane passion so, we ran into our respective apartment blocks on either side of the border.

The next Thursday, Michelle was killed in a car accident. I had not talked to her or seen her again. I had no standing to speak to her family. The social barriers remained. I did not know when or where was her funeral. Life went on as usual for Michelle’s family except that her sisters wore a black strip on their colorful clothing for a while. In a small corner of my heart, I have been grieving ever since for the love that never really ended because it never was.

One thought on “I Am Bored So Here Is A Story”