Skip to content
HomeWhy the US is behind in FinTech, in two charts

The US is frankly terrible at innovation in banking. When Kenya (and its neighbors) has faster adoption of mobile banking–as they have since at least 2012–it is time to reconsider our approach.

Here is the problem: we made new ideas in banking de facto illegal. Especially since the 2008 financial crisis, regulatory bodies (especially the CFPB) has piled on a huge amount of potential liability that scares away any new entrant. Don’t believe me? Let’s look at the data:

Notice anything about new bank creation in the US after 2008?

A possible explanation, in a “helpful resource” provided to banking regulators and lawyers for banks: 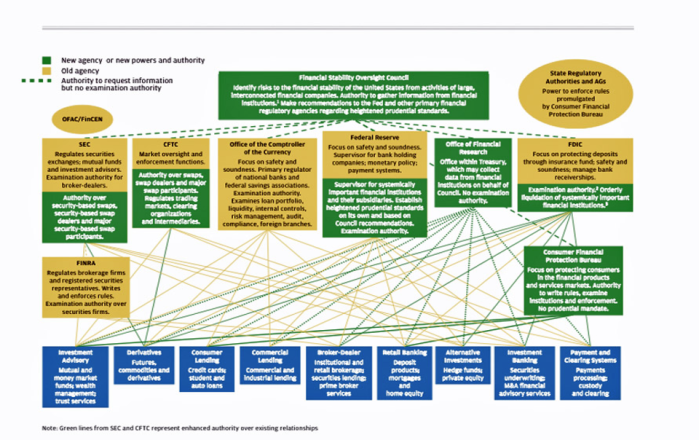 This shows: 8 federal agencies reporting to the FSOC, plus another independent regulatory body for fintech (OFAC/FinCEN). Also, the “helpful” chart notes state regulations just as an addendum in a circle…probably because it would take 50 more, possibly complex and contradictory charts.

So, my fellow citizens, don’t innovate in banking. No one else is, but they are probably right.

One thought on “Why the US is behind in FinTech, in two charts”