Most scholarship on Ayn Rand has been of mediocre quality, according to Gregory Salmieri, the co-editor of A Companion to Ayn Rand, which is part of the series “Blackwell Companions to Philosophy.” The other co-editor of the volume is the late Allan Gotthelf, who died during it’s last preparatory stages.

The reasons for the poor scholarship are diverse. Of course Rand herself is a large element. She hardly ever participated in regular academic procedures, did not tolerate normal academic criticism on her work and strictly limited the number of people who could authoritatively ‘explain’ her Objectivist philosophy to herself and Nathaniel Branden. Before her death she appointed Leonard Peikoff as ‘literary heir’. She inspired fierce combat against the outside world among her closest followers, especially when others wrote about Rand in a way not to their liking. The result was that just a small circle of admirers wrote about her ideas, often in a non-critical way. 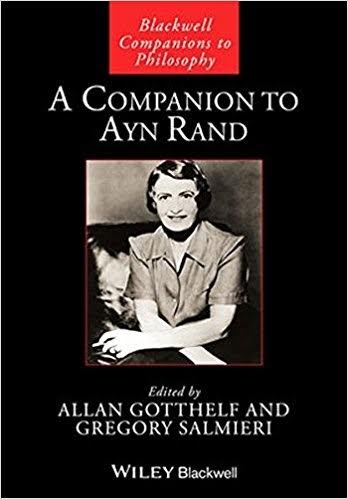 On the other hand, the ‘rest of the academy’ basically ignored her views, despite her continued popularity (especially in the US), her influence, particularly through her novels, and large sales, especially after the economic crisis of 2008. For sure, Objectivists remain a minority both inside and outside academia. Yet despite the strong disagreement with her ideas, it would still be normal to expect regular academic output by non-Randians on her work. Suffice it to point to the many obscure thinkers who have been elevated to the academic mainstream over the centuries. Yet Rand remains in the academic dark, the bias against her work is strong and influential. This said, there is a slight change visible. Some major presses have published books on Rand in the past years, with as prime examples the books by Jennifer Burns, Goddess of the Market: Ayn Rand and the American Right (2009), and Anne C Heller, Ayn Rand and the World She Made (2010). And this volume is another point in case.

One of the strong points of The Blackwell Companion on Ayn Rand is that the contributions meet all regular academic standards, despite the fact that the volume originates from the Randian inner circle. It offers proper explanation and analysis of her ideas and normal engagement with outside criticism. The little direct attack on interpretations or alleged errors of others is left to the end notes, albeit sometimes extensively. Let us say, in friendly fashion, that it proves hard to get rid of old habits!

It should not detract from the extensive, detailed, clearly written and plainly good quality of the 18 chapters in this companion, divided in 8 parts, covering overall context, ethics and human nature, society, the foundations of Objectivism, philosophers and their effects, art and a coda on the hallmarks of Objectivism. The only disadvantage is the large number of references to her two main novels, The Fountainhead and Atlas Shrugged, which makes some acquaintance with these tomes almost prerequisite for a great learning experience. Still, as a non-Randian doing work on her political ideas, I underline that this companion offers academically sound information and analysis about the full range of Rand’s ideas. So, go read it if you are interested in this fascinating thinker.