Skip to content
HomeHas Canada been Poorer than the US for so long?

A standard stylized fact in Canada is that we are poorer, on average, than the average American. This has been presented as a fact that is as steady as the northern star. But our evidence on Canadian incomes is pretty shoddy prior to 1870 (here I praise M.C. Urquhart for having designed a GNP series that covers from 1870 to 1926 and links up with the official national accounts even if I think there are some improvements that can be brought to measuring output from some key industries and get the deflator right). But what about anything before 1870? There are some estimates for Ontario from 1826 to 1851 by Lewis and Urquhart (great stuff), but Ontario was pretty much the high-income of Canada.

So, can we go further back? This is what my work is about (partially), and I just made available my results on Canadian living standards (proxied by Quebec where the vast majority of the population was) from 1688 to 1775 as captured by welfare ratios. So that’s pretty much the closest we can get to the “founding”. Below are my results derived from this paper. They show that the colonists in Canada were not very much richer than their counterparts in France with the basket meant to capture the meanest of subsistence and roughly equal to their counterparts in France with a basket that includes more manufactured goods like clothing and more alcohol. This explains why most migrants from France to Canada were “volunteered” (in the sense that they were pretty much reluctant migrants) for migration. But the key interesting result is that relative to New England – the poorest of the American colonies – it is poorer regardless of the basket used. Thus, there seems to be truth to the common logic about Canadians being always poorer than the Americans. 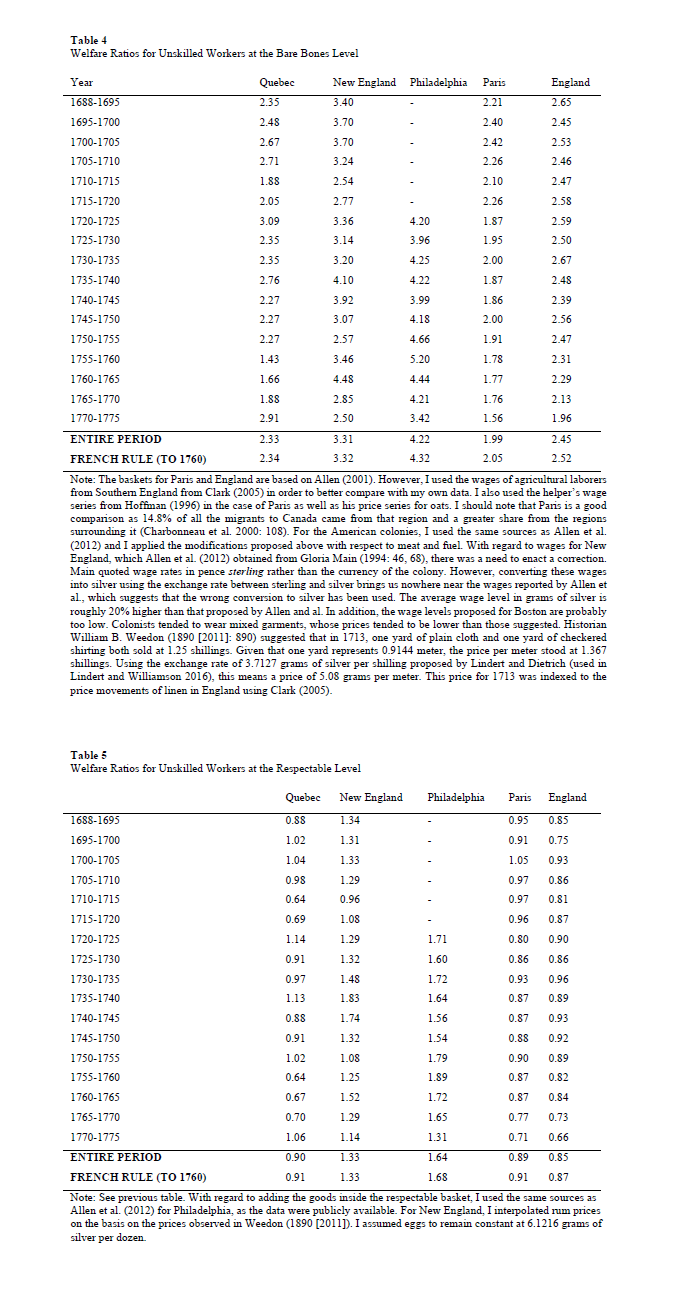 However, I am not fully convinced of my own results. This may surprise some. The reason is not that I do not trust my data (in fact, I think it is superior to most of what exists for the time given that I will be able to proceed to tons of other data). The reason is simple (and rarely discussed): natives.

Natives are always omitted from the stories of living standards. But they existed nonetheless. In terms of national accounts, if the British and French settlers dispossessed and killed natives, their welfare losses are just not computed. But the welfare losses of a musket shot to the head are real. I have always been convinced that if we could correct estimates of living standards to account for the living standards of natives, the picture would change terribly. The reason is two-fold. The first reason is that the historiography is pretty clear that while they were obviously not nice, the French were nicer than the British towards the Natives (at least until 1763 when the British shifted strategy). In fact, trade between French and Natives was very frequent and so it might be that for the whole population (natives + settlers), the French-area peoples enjoyed more growth and higher average levels. In the British colony, if the settlers killed and dispossessed natives, this is basically the British turning native capital stocks into their own capital stock or into consumption (which would enter settlers GDP but not change total GDP). In essence, this is basically a variation on the arguments of Robert Higgs with regards to measuring the American GDP in World War Two and Albrecht Ritschl on the German interwar growth. I am pretty sure that adjusting for the lives of natives would show a greater level for Canada leading to rough equality between the two colonies. However, I am not sure if the argument would cut that way (my guts say yes) since in their conjectural growth estimates, Mancall and Weiss show that with the natives included, their zero rate of income per capita growth turns into a positive rate.

Nonetheless, I still think that knowing that the settlers were better off in the US as an improvement over the current state of knowledge. Until ways to impute the value of native output and production are found, my current estimates are only a step forward, not the whole nine yards.

5 thoughts on “Has Canada been Poorer than the US for so long?”