Each time I start teaching classes at the business school where I am a course lecturer, I am always amazed at the disconnect between the quantitative facts and the beliefs that individuals have. My favorite relates to poverty and inequality.

Everybody seems to think that poverty is increasing and that worldwide inequality is increasing. Each time, I have to show figures to shoot down those beliefs. I also do it in the french media of my home province of Quebec where – as a result of pointing out those facts – I am branded as a “neoliberal” for being optimistic for the fate of mankind.

However, let’s think about it in the context of the new year to see why there is room for optimism. Let’s make a thought experiment similar to John Rawls’ original position but somewhat differently. You have a hat with all the years since the neolithic age, each on a separate piece of paper. If you had to hope for one year in particular, which would prefer? I would pick 2016!

By picking 2016, I have one chance in ten of living under extreme poverty. At any earlier point in time, these odds would have been close to 90%. (The data comes from the Our World In Data project by the amazing Max Roser). 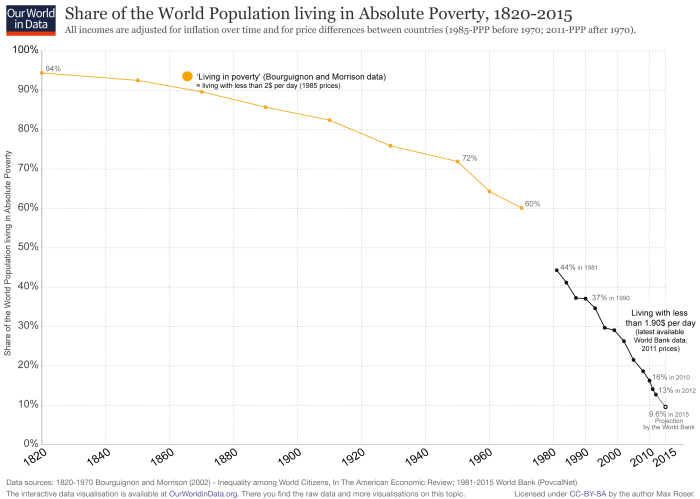 Although this diminished poverty does not explain every improvement with regards to every other metrics of living standards (life expectancy, infant mortality, nutrition, heights, body mass, survival to diseases), it does explain an appreciable part of these improvements.

Sit down with some friends to celebrate the new year and ask them about this “thought experiment”. Ask them if they would pick 2016. Once it is presented as such, I am sure that in spite of all the headwinds facing mankind, they will be optimistic.