The economy is in rough shape right now but suppose it were even worse: unemployment at 12% rather than 8%; GDP falling at a 17% annual rate rather than rising slowly.  A close advisor to the President counsels an array of interventions to stimulate the economy but is ignored.  Instead, the President cuts Federal spending in half and engineers drastic reductions in income  tax rates for all groups.  Meanwhile the Federal Reserve, rather than cranking up the printing presses for a round of monetary stimulus, snoozes through the whole year.

Now there’s a fiscal cliff for you.  If today’s thinking about the fiscal cliff of Jan. 1, 2013 held true, surely such policies would tank the economy big-time.

The foregoing scenario actually happened.  The year was 1920, the President was Warren G. Harding and his 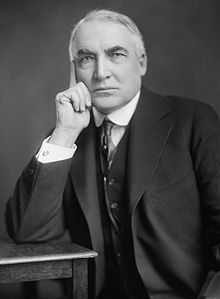 close advisor was none other than Herbert Hoover, who as President from 1929 to 1933 would have his way – raising taxes, jawboning wages, and slapping a killer tariff on the economy, thereby doing a great deal to turn the rather mild downturn of 1929-30 into the Great Depression which, with lots of help from Franklin Roosevelt, would plague the nation for another decade.

So what happened in Harding’s time?  Things were pretty rough for a while but by the summer of 1921, signs of recovery were already visible.  The following year, unemployment was back down to 6.7% and hit 2.4% by 1923 (source: Thomas Woods, “The Forgotten Depression of 1920″).  A budget surplus arose resulting in a noticeable decline in the national debt.  Business confidence soared and the 1920’s boom was off and running.

President Harding has gotten a bad rap from history because of the scandals that erupted during his administration as well as his chronic womanizing and his passion for the bottle.  But in the countdown of 20th century Presidents that I might do for this blog should I ever get ambitious, I will start with Harding as the least bad President of that sad century and work my way down from there.  I’ll let you  guess who I will honor as the Worst President of the Century.

How does the looming fiscal cliff compare with the policies of 1920?  In case you’ve been hiding under a rock lately (not a bad way to ride out the election campaign!), the fiscal cliff is the set of automatic tax increases and spending cuts that were agreed to when the debt ceiling was raised in 2011.  Congress decided to force its future self to act by lighting a time bomb that it would surely – surely! – defuse before it could go off.  The fuse has now burned to within 1/8 inch of the bomb.

The bomb’s tax increases and spending cuts would reduce the deficit by an estimated $600 billion in one year.  That may be the most accurate estimate but it’s only an estimate.  Congress can set tax rates but tax revenues depend on the size of the tax base.  If highly productive people, those who would take the biggest hit, decide to Go Galt, the tax base could shrink.  And as Jeff Hummel likes to point out, tax rates, particularly the top marginal rates, have varied drastically over the years and yet tax receipts have not varied much from 20% of GDP, excepting the World War II years.

Not only might tax receipts fall short, but expenditures could rise if additional welfare payments such as unemployment benefits or food stamps were to rise.

But let’s assume the fiscal cliff happens and the deficit is indeed reduced by $600 billion. Using figures for the fiscal year just ended, we would still have a $400 billion deficit which would have to be financed by borrowing.  As always, this would be new borrowing, on top of the borrowing needed to roll over the daily stream of maturing debt.  And we mustn’t forget the Social Security Trust Fund which until last year has mitigated the deficit by “investing” its surpluses (FICA tax revenues minus benefit payments) in Treasury securities.  Those FICA surpluses have now turned to deficits which for the present are offset by interest payments on Trust Fund holdings but will eventually require the Trust Fund to stop rolling over maturing securities and, should the trend continue, to deplete its holdings entirely.  All of these developments exacerbate the main federal deficit.  The same applies to the much smaller Medicare Trust Fund.

So I say, with a glance over my shoulder at 1920, bring on the fiscal cliff!  Let the cuts happen, thereby ending a lot of wasteful and harmful spending – particularly “defense” spending.  Let tax rates rise; people will work around them.

But it won’t happen because too many special interests will rise up to prevent it:

The fiscal cliff won’t happen, at least not all of it, except perhaps for a brief period in January which will be fixed retroactively.  And so, though I hate to say it, I think the longer-term odds of pulling out of our fiscal death spiral are pretty slim.  Many think the government will resort to the time-honored remedy of the printing press, but Jeff Hummel has made a solid argument as to why this option won’t work and why there will be a default on Treasury securities instead.

Hummel also urges economists to do whatever they can to warn people not to count on government largess.  Most young people have written off Social Security for their future and that’s a good thing.  (Not so good for Social Security recipients like me who are increasingly unemployable yet hope to live another 25 years.)  We must take responsibility for our own health care, first by watching our health habits and second by cultivating a personal relationship with a physician, perhaps offering him or her cash payments.  We should be leery of Treasury Securities or of banks, mutual funds, etc. that rely heavily on these securities.  Sock away a few gold and silver coins.

We’re in for a rough ride, I fear, over the next few years.  But the sun will still rise and tangible assets will remain.  Provided enough of us have taken precautions, social unrest will be manageable and maybe, just maybe, the cancer that is called Social Democracy will be shaken off once and for all.