Here is a story that’s more than a story.

All our food was organic and no one was overweight. We wore only natural fibers, from sheep and from the cotton fields of Africa.

Children did not get fat spending their days and nights in front of a stupid screen of one kind or another. We read instead.

No one was over-caffeinated or on pills. We rarely went to the doctor.

Kids with Attention Deficit Disorder did not disrupt any school.

We used water sparingly and washed our hair and bodies in simple, non-polluting soaps. We did not waste water or energy with long showers.

My own personal carbon footprint was close to zero, I am sure.

There were few car accidents, unlike now.

The year was 1950, in Paris, France where I was born and raised. Those were the good old days, when people still knew how to live rationally and to walk lightly on the Earth.

Food used 60% of my father’s salary. We were not especially poor; my father was a city cop with a regular salary.

There was enough food, if you count a pound or two of bread a day. In my family, we had meat several nights a week, lots of it even. Great big platters of singed, ground horse meat. Old farm horses did not die in vain! They got recycled.

There were even fruits, oranges, several times a week for five months out of the year easily. In the summer, you could always pick green apples from a neighbor’s tree, if you were not left behind in the city.

Children had food poisoning frequently. Mostly it was not serious. You had itchy pimples for a week or two; you would scratch them day and night; a scab would form and then, they would go away. Vomiting was an infrequent but normal occurrence. You did not go to the doctor because in most cases, there was nothing he could do,

In fact, antibiotics were in use but they were reserved for serious bacterial infections. Vaccines worked for some diseases, except polio, which left you crippled for life. There no vaccine for childhood diseases. There were so many of those that kids spent much of the first 7 years of their lives in bed, often with burning fever. 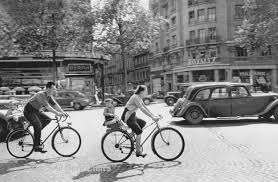 But, back to my favorite subject, food and drink.

In the winter, housewives placed the butter on the window sill to keep it cool and firm. In the summer, there was no butter.

Speaking of cool, I had ice-cream several times that year, 1950, at least twice, maybe three times.

Now, I live in California, in a coffee-shop sort of town. So, let me give you, cool edgy, cosmopolitan types everywhere, authentic recipe for real café au lait, straight from my childhood.

After dinner, Mom and Dad savored a single cup of coffee made in a sock coffee pot. The next day, they used the same old grounds mixed with roasted chicory root, a cheap coffee substitute. You pour hot milk over the mixture, and presto, café au lait. How chic! That was breakfast, with a piece of bread and butter.

So, even coffee grounds got re-cycled. Incidentally, chicory, the plant, was grown in the plains outside Paris. So, drinking that brew daily was a significant form of “Buy local” activism.

My father drank a glass a wine with every lunch and dinner. If I tried to serve you the same wine today, you would think it was a practical joke, or perhaps, attempted murder. It was that bad! And that was in France.

Kids has one shirt or two each. They wore the same woolen pants and the same sweater for six months. In the summer months, you got sweaty, in your wool pants, of course. That was part of life.

Children’s underwear was washed pretty much every week though, in the kitchen sink. I mean that we did not wear the same underwear for more than five or six days, seven days, tops.

Speaking of underwear, unfortunately, my grandmother was a competitive knitter. There were five of us. My mother saved money by having Grandma knit wool bathing suits for each of us. I am not making this up!

In our neighborhood, my family was re-known for its neatness. We were considered a model for our personal hygiene. We all took a bath every week whether we needed one or not. My mother insisted on it. She would draw hot water into the bathtub and soak the smallest children in it. Then, the older children were invited into the same tub of water, one by one, for 4 or even 5 minutes. My father was last. No problem, the water was still pretty lukewarm then. There was no shower, of course. Showers are wasteful. We had already invented a creative use for gray water: Dad bathed in it.

We used the same bar of unscented industrial soap for all bodies and all hair. (I would not be surprised if my mother had had her own hidden stash of real shampoo though.) I don’t want to dramatize. Only a few years later, when I was about fourteen, I was alloted my own single dose of shampoo once weekly, without fail.

There was no television, of course, but four, in some places, even five radio channels. Music came from the radio exclusively. That gave you, or rather, the whole family, a choice. Evening, there were concerts easily on two of the four channels. If you didn’t like either, you could always go to bed early, a healthy habit.

There were no laptops because there were no computers at all, of any size. Typing was excruciatingly painful and frustrating. It was so difficult that there were thousands of professionals, mostly women, who made their living doing just that. Very few people, those with good handwriting, would have dreamed of writing a poem, or a story destined for others at the drop of a hat. Those had to be planned around typists’ availability. No spontaneous creativity allowed!

By the way, the dependence on typists lasted a long time. The hardest part of my doctoral dissertation, completed in 1974, was the difficulty of finding a typist to make two copies, and the cost involved. The research was child’s play by contrast. But back to 1950.

There were books but they were in the city library. (No school library anywhere, not even as a concept.) You could not take books out at all. You had to read them right there, sitting on hard wooden benches. The librarians’ job was to keep the books away from you as much as possible, so you would not ruin them.

The school day was six hours, five days a week, four hours on Saturday. Predictably, some boys couldn’t take so much sitting down and listening quietly. They would snicker, or push each other. The teacher beat them on the spot, or the Principal; then, they would go home with a bad conduct score and their fathers would beat them again.

My older brother got a beating every Friday evening, like clockwork. You have to understand the parents problem. They could not very well ground kids from TV because there was not any. Same with the computer. They couldn’t even send ill-behaved kids to their room because they were likely to have two or three accomplices – siblings – sharing the room with them.

So, you just beat them, beat them as if you did not know them, as if you had never even heard of them. It helped the parents’ mood, at least.

I know I bragged about my near zero carbon footprint. Paris had an excellent public transport system. It still does. But bus tickets were expensive relative to what was left of family income after (organic) food. Subway tickets were not free either. Later on, when I go to be around twelve, I had the free run of Paris, a great city. But, I could seldom afford round-trip subway tickets to the center. Remember, my family was far from dirt-poor.

My life was largely restricted to ten or twelve streets in my immediate neighborhood. Forays to the outside were mostly on foot, and therefore, quite limited. I was limited too. I was a Parisian, but very parochial in my knowledge of the world.

The risk of a car accident was low because only a handful, the very rich, owned a car. Sunday night, the whole family gathered on the balcony to watch them come coming back from the countryside in their diesel powered cars. That was so much fun!

So, I realized, fairly recently, that I had grown up in an ecologically sound, behaviorally green socio-economic environment. Early in life, I experienced a kind of green utopia, you might say. Just what many residents of my good town of Santa Cruz, and many environmentally conscientious Americans aspire to, what they desire fervently our country will achieve.

Been there, done it. It’s just called poverty! I don’t want to go back then. Count me out! Please!

The stimulus package, the bailing out of the part of the American auto industry that has been failing for thirty years, the AIG life-boat with five holes in its hull; the budget with 7,000 to 8,000 earmarks, the new contorted, hard-to-believe plan for liquidating poisonous assets. (I must have forgotten some financial boondoggle of the past two months):

They are all big potholes in the road. You will survive if you have a good car. You should worry about the future and the so-called, “cap-and-trade” plan. It’s a smart-sounding name for a new permanent tax. It’s a tax on the 95% of all energy used in America that comes from petroleum, liquid gas and coal. Energy goes into every product and into every service. So, cap-and-trade is a tax on everything. A tax on everything is also a tax on everyone, the least fair kind of tax according to liberal doctrine. (We are so stunned, we have lost even our capacity to notice gross contradictions in the Pelosi-Obama actions.)

Cap-and-trade has the potential to reduce our living standards permanently, down to the level describes in the story above -equivalent perhaps to the standard of living in the US around 1940.

Conservatives should link arms with the many rational people among independents and even among Democrats who don’t want poverty for themselves and for their children, and grandchildren.

5 thoughts on “The Good Old Days”