Two things on my mind this Bastille Day 2012. The first is who is more stupid, French leftists or American liberals? I have life-long knowledge of both tribes. At this point, I think French leftists are smarter but more dishonest that their American cousins. In general, there is a certain artlessness about deception in ordinary Americans. The French are often artful; can’t take that away from them.

The second matter on my mind is that constant struggle to avoid using nasty epithets in connection with liberals’ statements. One that keeps coming up is the simple “stupid.” I scrupulously avoid the word on this blog and in my other writings. Yet, there are informational events that sort of self-label with no escape possible. Here is one, below.

It’s shortly after 5 pm on Sunday July 10th 2012. I am in my pick-up truck listening to National Public Radio. (I know the combination is jarring.) There an in-depth discussion of the minimum wage. That’s always interesting. Conservatives make an apparently impeccable theoretical argument against: Minimum wage laws create unemployment among the most vulnerable categories of the work force. Liberals sometimes make sophisticated arguments for the minimum wage. Behind those, however, I always find the usual combination of mindless jeremiads of “sad” and “unfair.” But, it seems to me that the empirical evidence supporting the conservative position against minimum wages is on the thin side. Listening to a relaxed radio show from the Left could be a good way to find out more.

The NPR reporter stages an older woman who makes her living and that of the three children in her charge working early morning shifts at some airport or other. She is quite unskilled and her job is to move handicapped people around in one of those little carts. For this, she earns $18,000 /year. That sure is not a lot of money. This mean old conservative hopes it makes her eligible for food stamps.

The reporter describes the woman’s financially tight life. He stops my mind on its narrow track by reporting that it takes one pay check just to buy back to school shoes for the three kids. My little mental arithmetic cogs are turning fast while I keep most of my attention on the road.

Suppose total deductions on paycheck amount to 25% (I have no idea why it should be so high.) Her take-home monthly pay = $1,175

That’s the amount the minimum-wage lady says it takes to buy back to school shoes for the three kids in her charge.

Second, more reasonable possibility: She buys each child two pairs of shoes for an average of $195 per pair. 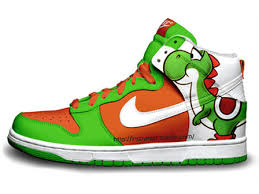 Something is wrong. I reared two children in a pricey part of California. I was no where near minimum wage. Neither of my children ever, ever had a pair of shoes that cost nearly $200 of today. I have a grand-daughter who is three. Neither I nor her mother will ever, ever buy that precious girl a pair of shoes worth $200 of today. That’s never, no matter if “all the other girls have them,” no matter if 110% of the girls have them.

Is there an explanation I am missing?

And would I ever dare make up such a story in order to disparage liberals? Do I need to?

And, incidentally, as you read this little tale, did you find yourself wondering about the …hempf… social personality of the lady, the minimum wage earner? Did you, perchance imagine what her voice might sound like? And how about her hair?

Yes, you got it. The NPR in-depth liberal journalist gets caught spreading the worst of  the worst of stereotypes. It’s not the first time I report such an event on this blog.

Many of those people are simply stupid. Here, I said it, “STUPID!”

Mind you, whatever the lady decides to spend the money she earns on minimum wage on is none of my business. Her money is her money, bless her heart! It’s just that the story of the shoe expenditure does not make a good sentimental argument in favor of raising the minimum wage, or in favor of anything having to do with the minimum wage.

With friends like the NPR liberal journalists, the poor don’t need enemies.