Skip to content
HomeThe UN, Our Beacon of Humanity

Yesterday or today, the French centrist and generally responsible newspaper Le Figaro reported that the Syrian security forces had killed about 250 Syrians in the preceding night, almost all civilians. That’s what Le Figaro asserts. How do I judge whether it’s true or not? The Syrian Minister of Information declared that the anti-government insurgents themselves has mortared civilians in Homs to give the Assad regime a bad name! Do I need more evidence?

Human Rights Watch, which I generally trust with figures, has not had time to say anything about this number. Yet, the organization endorses the general figure of 5400 Syria dead for the year 2011 announced by the UN General Commissioner before he stopped counting. As I have said before, that figure is pretty much like 40,000 victims would be in the US.

Now, when any part of the UN insults Israel, no one is surprised because holding that country of fewer than 7 million responsible for all the ills of the Arab World has been one of the UN’s areas of consistency. That’s together with incompetent and impotent “peace keeping.” This time, the UN slapped the Arab League, no less, in the face. Normally, the UN General Assembly does anything the Arab Leagues wants, no matter how absurd, grotesque, or dishonest. Nowadays however the Arab League often finds itself on the side of common sense and of humanity. So, all bets are off.

What happened is that yesterday, 2/4/12, the Communist Chinese and the ex-Communist Russian gangsters joined hands at the Security Council to veto a motion from the Arab League that was trying to tell the fascist Baath Party President Assad of Syria to slow down in the killing of his citizens.

Both Russia and China are permanent members of the UN Security Council. To ignore them is to ignore the UN. Of course, that’s exactly what I think the US should do instead of lending its credibility to those who make the world safe for the freedom of tyrants to mass-murder as is convenient. 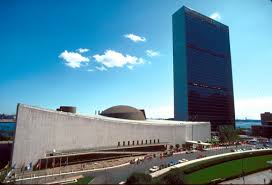 The fact is that the UN delegates are appointed by a combination of properly elected governments, of electorally fraudulent governments, of national mafias, of bloody despots, of madmen, and of downright morons. There was even a certified cannibal in the lot once. And no, I am not making this up. He was “Emperor” Bokassa, of Centrafrica. Look it up. It makes an edifying story about the United Nations as a moral force in the world.

I find it difficult enough to live under a federal government that is partly a product of Illinois or New Orleans politics! Why should I respect the UN?

And, speaking of morons, I swear, there will be some cultural relativists to say:

“ Well, they eat each other; it’s their culture. We have no right to judge or even more, to meddle.”

I am completely insensitive to the pious notion that the United National is in any way a moral force in the world, even moderately so, or that it serves any US purpose whatsoever. It’s mostly a loincloth draped over the rapist’s obscene tool. It’s not a useful forum, as innocent people will repeat. We can talk to anyone we want merely by picking up the phone, including to the silly young fatso in starving North Korea and to the mad child-molesting imams in Iran. And if we want regular verbal commerce with our friends, a League of the Democracies would do fine. It would have admission requirements that most ordinary Americans could easily design. This is not hard to understand. What’s lacking is the moral courage to say, “Ooops, it did not turn out the way we intended in 1945 when we birthed the monster!”

9 thoughts on “The UN, Our Beacon of Humanity”