I have been busy producing a legible and clean copy of my memoirs: “I Used to Be French….” It’s an endless process. By the way, if you are an agent, don’t be shy about asking to read this remarkable and witty document.

While my back was turned, the world continued to turn. The French lost the battle of Puebla and they lost an election, all in the same day.

People in California celebrate Cinco de Mayo with beer and more expensive stuff. Few know what they are celebrating, Anglos, never, children of Mexicans, seldom, Mexican immigrants, often but not always. Myself, I celebrate too because I like beer, Mexicans and Mexican beer. I celebrate discretely though.

In the battle of Puebla, in 1862, under the presidency of Benito Juarez, a Mexican army achieved victory over a French expeditionary forces against all expectations. What happened is that the French thought they were on their way to Prussia to beat on that emerging power before it was too late. They turned right instead of left outside Paris by mistake. Somehow, they ended up in Mexico and the rest is history, mostly forgotten history. They left behind in Mexico, probably pan dulces, and less probably, the name for roving musicians in charro costumes, mariachis (“marriage”).

Pretty much the same thing happened Sunday in France except that the French turned left when they should have turned right. They elected the grayest, least accomplished politician of all times to be their president for five years. He has done even less in his lifetime than Barack Obama […]

Mr Sarkozy’s goose was cooked anyway. He talked the talk but he did not walk the walk of reform away from a welfare state the French kind of know they can’t afford. Much of Sarkozy’s presidency was wasted on the soap opera of his private life. Beside, finally, in reality, those European governments that were in power in the fall of 2008  have been tossed, irrespective of their political color. That’s the rule. Bad luck but that’s the way it is. 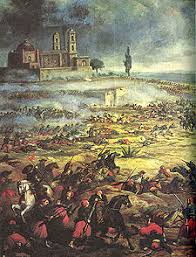 What’s wrong with last Sunday’s French presidential election is not that the Socialist Party won it; the handwriting was on the wall. What’s wrong is that the winner, Mr Hollande, is a nobody. He only became the Socialist candidate because an overzealous New York prosecutor first accepted the word of a chambermaid who turned out to be a liar.

I keep wondering how different French contemporary history would be if the complainant had not been a person “of color” and if the complaint were not about a sexual assault but about a theft, for example. The fact is that Mr Strass-Khan, the most likely Socialist presidential candidate then probably knows something about economics and that Mr Hollande, his last-minute replacement, probably does not.

Two things are at stake, here. First, in spite of the farcical aspects of the French election, France is an important country, the second biggest economy in Europe in most years. If that big country also attacks the prudent, intellectually obvious financial position of Germany, it may just carry the day in Europe and that will be the end of the Euro. The wise German Chancellor might yield or her coalition might just be swept out.

The second possible consequence of Mr Hollande’s Socialist victory is the same that threatens most of Europe. The continent is not going to disappear in a big hole as some of the most intemperate conservative commentaries would seem to have it. Instead, it may well become Argentina. What threatens Europe today is not “Socialism,” whatever that means today; it’s Peronismo. I mean ever-increasing benefits for regular people accompanied by every public effort to make the rich leave and associated with the creation of a political climate that repels all investment.

What a new French President was supposed to deal with  and will not is this: The French economy has been run for thirty years like a prosperous summer camp. The main concern has been to create more games, more opportunities for fun, more celebration, more fun overall without concern for paying the bill. The bill is coming due; it’s been fun; few politicians are willing to acknowledge the simple fact.

Mr Hollande comes from the wing of his party that has not had a thought in forty years. He is not likely to understand or to tell his fellow citizens, “Time to wind down the party.” His most-noted promise is to return the legal age of retirement in France from sixty-two to sixty. Simple!

Rarely in history has an act of collective self-sabotage been so clear, so obvious. Denmark, Sweden, and Germany conducted the necessary reforms several years ago. Their economies are thriving. The rest of the Europeans are stumping the ground with their little feet screaming, ” No, I don’t want to go home from the party; leave me alone! I hate you!!!”

For the French, it will be another battle of Puebla: They will have no recollection they took the wrong turn; they will soon have forgotten that they took part in a war. Their children will not have any knowledge that they lost it.

One thought on “The French Presidentials and Cinco de Mayo”