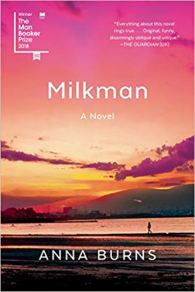 In the discussions on Brexit the situation along the Irish-Northern Irish border is pivotal. Nobody wants a return to a ‘hard’ border, even though that is the obvious consequence of the UK leaving the Common Market and Ireland staying in it.

For those unfamiliar with the reason why this is troublesome there are a loads of good reads on what the British called ‘The Troubles’, but what by all standards was a cruel civil war, with 3500 deaths and many more injured. The two recent books I would like to bring to the attention of the readers are different.

Milkman is a novel that won the Man Booker Prize. It is a story about a young woman growing up in Troubled times, and what is particular gripping is the sense you get of the intensity of life in those days. Everything in daily life was somehow drawn into the conflict, you had to think about your moves all the time and everybody lived in fear. Not only for the enemy, but at least as much for the paramilitary group that happened to control your area. They did not just wage their war, but literally wanted to control everybody in their neighborhood.

Say Nothing is narrative non-fiction, well-researched and with hundreds of pages of notes. It is written in very attractive prose, not like any regular history book. The focus is on some of the key-players on the IRA-side, the bombs, and the attacks. Central is the disappearance and subsequent murder of a mother of ten by one of the main people in the story. The book also pays a lot of attention to Gerry Adams’ denial to have played any role in the violent side of the civil war. One of its strengths is also that half of the book tells what happened after the Good Friday agreement, which formally made an end to the Troubles. If only it did…

These are great books to learn more about one of the bloodiest conflicts in Europe in recent times. They also help to understand current debates about Brexit. Hopefully, they will just keep saying something about the past…

Last year, Britain voted to leave the European Union under a banner of anti-immigration and protectionism. Since then, both social democrats and classical liberals have been waiting to catch a break. Ever the optimist, I hope they may have just got one, from an unlikely source, the Democratic Unionist Party. They are a Northern Ireland-based Protestant party that is usually at the margins of national British politics. Thanks to the outcome of the latest general election, they may be in a position to force the British Conservatives towards a more trade and immigration friendly Brexit.

In April, Prime Minister (for now) Theresa May called a snap election. She didn’t need to face the electorate until 2020, but decided to gamble, thinking that she would increase her working majority of Conservative MPs. Instead, as we discovered yesterday after the polls closed, she did the opposite, reducing the slim majority that David Cameron won in 2015 to a mere plurality. This was against one of the most radically left-wing opponents in decades, Jeremy Corbyn.

This was a dismal failure for the Conservatives but the result is a relatively good sign for liberals. I feared that Theresa May’s conservative-tinged anti-market, anti-human rights, authoritarian corporatism was exactly what centrist voters would prefer. It turns that Cameron’s more liberal conservativism actually won more seats. Not only is an outward-looking liberalism correct, de-emphasizing it turns out not be a popular move after all.

Without a majority, the Conservatives need to form a coalition or come to an informal agreement with another party. This seems likely impossible with Labour, the Scottish Nationalists or the Liberal Democrats who have all campaigned heavily against the Conservatives and disagree on key issues, such as whether Britain should leave the European Union at all. This leaves the DUP.

In terms of ideology, the DUP is far to the right of most British Conservatives. Their opposition to gay marriage, abortion, and occasional support for teaching creationism, means that they have more in common with some Republican Christian groups in the United States than the secular mainstream in the rest of the United Kingdom. Historically, at least, they have links with pro-unionist paramilitaries that have terrorized Irish Catholic separatists.

There is, however, one way in which the DUP are comparatively moderate. While content with the UK leaving the European Union, they want to keep the land border between Northern Ireland and the Republic of Ireland (an EU member) open. Closing it would reduce critical cross-border trade with an economically dynamic neighbor and re-ignite violent tensions between the Protestant and Catholic communities in Northern Ireland.

How could this be achieved? Leaving the EU while keeping a relatively open trading and immigration relationship is similar to the so-called Norway Option. Norway is within the single market but can exempt itself from many parts of EU law. In return, it has no direct representation in EU institutions. If the EU could accept such an arrangement, then the DUP may be able to make Conservatives commit to it.

Of course, the DUP will extract other perks from their major partners as part of any deal. But their social policy preferences are so far to the right of people in England, Wales and Scotland that this will hopefully have to take the form of fiscal subsidies to their home region (economically damaging but could at least avoid infringing civil liberties).

It might seem paradoxical that an extreme party may have a moderating influence on overall policy. However, social choice theory suggests that democratic processes do not aggregate voter, or legislator, preferences in a straightforward way. Because preferences exist along multiple dimensions, they are neither additive nor linear. This can produce perverse and chaotic outcomes, but it can also generate valuable bargains between otherwise opposed parties. In this case, one right-wing party produces an authoritarian Brexit. But two right-wing parties could equal a more liberal outcome.

That’s the theory. Has something like this ever happened in practice? Arguably, Canada is an outstanding example of how a minority party with many internally illiberal policy preferences produces liberal outcomes (see the fascinating Vaubel, 2009, p.25 for the argument). There, the need to placate the separatist movement in Quebec involved leaving more powers to the provinces in general, thus keeping Canada as a whole much more decentralized than Anglo-Canadian preferences alone could have assured. Will the DUP do the same for Britain? We can but hope.