The high-wage economy thesis is a topic I have blogged about many times before as I think it is an important debate among economists and economic historians (see notably here and here, see also this contribution of mine to the Journal of Interdisciplinary History). For those unfamiliar with this thesis, here is a simple summary of the idea advanced by Robert Allen: high wages relative to capital units was a key force in the industrialization of Britain and thus it explains why the Industrial Revolution was British before if was anything else.

As I have explained in the aforementioned blog posts, I am unsure of where I stand regarding this idea. I tend to be skeptical, but I have stated the evidence needed to convince me of the opposite. In the past year or so, there has been an avalanche of articles on the topic including this article by Humphries and Weisdorf, a follow-up working paper by the same authors, another paper by Judy Stephenson and a working paper by Stephenson (bis). Today, Robert Allen replies to his critics in this working paper.

I find that some of the points are convincing, however I must take issue with a particular point that falls into my ballpark as Allen mentions my work on wages in France (the aforementioned article in Journal of Interdisciplinary History). In my research, I pointed out that Allen’s computations underestimated wages outside Paris. With the correct computations, the rest of France does not appear as poor relative to England as Allen suggests. Allen concedes this point but then goes to state the following:

Geloso (2018) has pointed out that the Strasbourg unskilled wage series for 1702-64 is low in comparison to that of comparable towns, and workers may have received food, which has not been taken into account.  This is a perceptive point, but its implications are limited. The most important use I make of the Strasbourg evidence is in calculating the ratio of the wage to the user cost of capital. If the Strasbourg wage in this calculation is raised to that of neighbouring towns, the wage-capital cost ratio does rise but only by a small degree. The reason for this somewhat surprising result is that the wage is also an argument in the formula for the user cost of capital–building workers have to build the machines and the mills that house them–so the denominator of the ratio increases as well as the numerator, although to a lesser extend.

This is a incorrect characterization of my argument. First, I did not state that wages in Strasbourg did not account for in-kind payment. I stated that in-kind payment was evidence that the wages did not pertain to Strasbourg! The wages from the primary sources were for a city some 70 km away from Strasbourg, they did not concern unskilled workers and they included large in-kind compensation. To correct for this problem, I compared agricultural wages in England with those around Strasbourg that had been collected by Auguste Hanauer. What I found was the the lowest wages in farming were equal to 74% of farm wages in Southern England (as opposed to 64% with Allen’s stated wages). While I did not report this in the article because I had doubts, it is worth pointing out that the high bound of farm wages in Strasbourg is above the level reported for Southern England (which acts a proxy for England – see table 2 in my paper). As Strasbourg is a proxy for living standards outside Paris, my finding suggests a much smaller gap in living standards. It also entails a much more important change in the cost of capital to labor (wages are in the range of 50% above those suggested by Allen and sometimes they are higher by more than 100% which would mean a halving of the relative cost of capital! These are not peanuts to be thrown on the sidewalk!

Second, I ought to point out the nature of my argument. I was not trying to prove/disprove the high-wage hypothesis. My point was much more modest. The mirror of the question as to why the industrial revolution was British is why it was not French. France had a large population offering large returns to scale (in both economic and political organizations) and an array of navigable rivers that facilitated internal trade. It also key pockets of Lancashire-like industrialization such as Normandy (for textile) and Mulhouse (the French Manchester). As such, it is an entirely reasonable endeavor to try to situate living standards in France relative to Britain. If France was massively poorer than England, then Allen has a greater likelihood of being correct. If it was closer to an equal footing (I do not believe that anyone places France above England in circa 1750), then Allen’s critics have a greater likelihood of being correct.* However, regardless of the answer, the data does not infirm/confirm the high-wage hypothesis. It merely situates relative likelihood. As I point out that wages were quite above those postulated by Allen, I am merely stating the extent of the reasonableness of being skeptical of the high-wage hypothesis.

Finally, it is worth pointing out that the work of Leonardo Ridolfi is absent from Allen’s reply. The latter’s work is very important as it echoes (in a much richer manner) my point that wages outside Paris were not as low as cited by Allen.**

** Ridolfi shows France had incomes equal to 64% of English incomes circa 1700. However, I am skeptical of this figure. This is because, while I trust the index produced by Ridolfi, I am unconvinced about the benchmark year to convert the index into international dollars.

Every few years, an economic historian in training spends thousands of hours in archives assembling a long quantitative essay. It’s the work of monks (in fact, when you go far back in history, you also end up working with monks and nuns – which was my case on Canadian economic history). It’s the kind of work that requires patience, attention to details and (did I say it already?) patience.

I did that for my own work on Canadian economic history. For two years, I locked myself in the archives of two religious congregations to collect and transcribe close to a million price and wages information. For these two years, I did not write one single paper. I just collected the data and constituted a list of the papers I could write. However, once its finished, you may party like a sailor fresh off the boat because you end up with a wealth of data to answer hundreds of questions. When I finished my own thing on Canada, I was thrilled as I thought it constituted a great advance in quantitative knowledge (which I could use to assess tougher historical questions).

However, compared to the work of Leonardo Ridolfi, my own work looks like a dwarf (I confess envy here).  Ridolfi spent hundreds of hours assembling a quantitative essay on France’s economy since 1250. This is monumental!  France has generally been a statistical abyss (except for demography and some price series) especially when compared to England. Yet, the country is highly relevant to western economic history. After all, the question of why did the Industrial Revolution take place in Britain is the mirror of asking why it did not happen in France. As a result, Ridolfi’s work fills one of the largest voids in the field of economic history and will end up being one of the most cited dissertations for the next ten years I expect.

He constructed estimates of real wages, prices, incomes and working hours. As such, he provided the widest possible statistical portrait possible which (I wont get into details here) circumvents tons of empirical complications that may limit the quality of each variable taken separately (see for example the manner in which GDP is calculated and the role that estimating working hours plays).

I invite anyone interested in economic history to read his work. But, I will give you the main conclusion I gathered: France was not as poor as many believed. I recently pointed this out in an article which I am trying to get published, but Ridolfi’s work proves my point beyond my wildest expectations. I assembled the most relevant figures below. 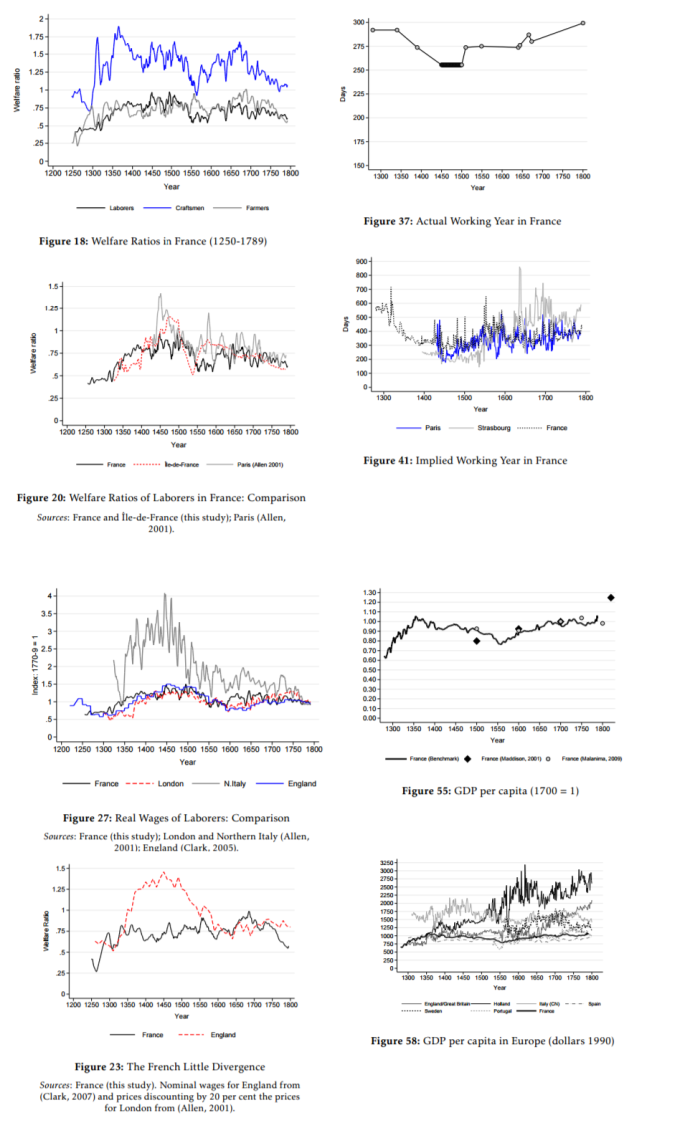