Some years ago, I read The Improving State of the World: Why We’re Living Longer, Healthier, More Comfortable Lives on a Cleaner Planet by Indur Goklany. It was my first exposition to the claim that, globally, there has been a long-trend in the equality of well-being. The observation made by Goklany which had a dramatic effect on me was that many countries who were, at the time of his writing, as rich (incomes per capita) as Britain in 1850 had life expectancy and infant mortality levels well superior to 1850 Britain. Ever since, I accumulated the statistics on that regard and I often tell my students that when comes the time to “dispell” myths regarding the improvement in living standards since circa 1800 (note: people are generally unable to properly grasp the actual improvement in living standards).

Some years after, I discovered the work of Leandro Prados de la Escosura who is a cliometrician who (I think I told him that when I met him) influenced me deeply in my work regarding the measurement of living standards and who wrote this paper which I will discuss here.  His paper, and his work in general, shows that globally the inequality in incomes has faltered since the 1970s.  That is largely the result of the economic rise of India and China (the world’s two largest antipoverty programs). 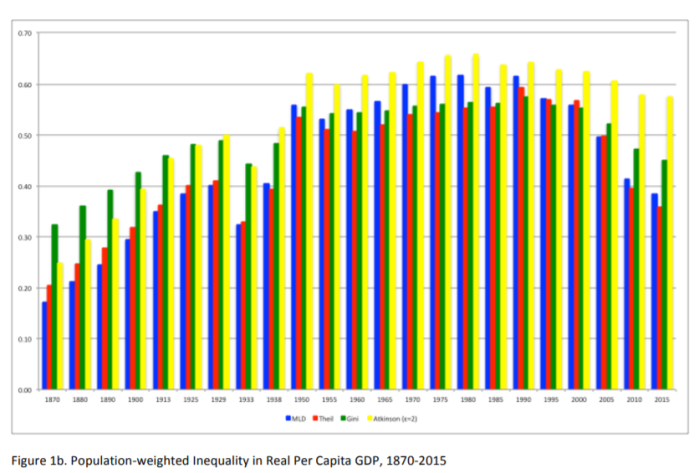 However, when extending his measurements to include life expectancy and schooling in order to capture “human development” (the idea that development is not only about incomes but the ability to exercise agency – i.e. the acquisition of positive liberty), the collapse in “human development” inequality (i.e. well-being) precedes by many decades the reduction in global income inequality. Indeed, the collapse started around 1900, not 1970! 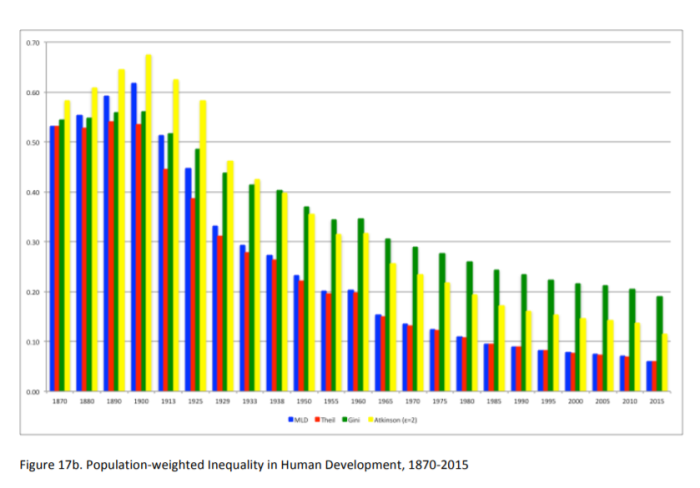 In reading Leandro’s paper, I remembered the work of Goklany which had sowed the seeds of this idea in my idea. Nearly a decade after reading Goklany’s work well after I fully accepted this fact as valid, I remain stunned by its implications. You should too.