In a twitter-debate with Tariq Nasheed, I pointed out that the wages rates did converge between the 1940s and 1990s. Recently, Robert Margo of the University of Chicago extended this to per capita incomes since 1870. It is fascinating to see that there was convergence between 1870 and 1940 in spite of Jim Crow laws (it tells you how much more blacks could have achieved had the laws not existed – see notably the work of Bob Higgs on this). 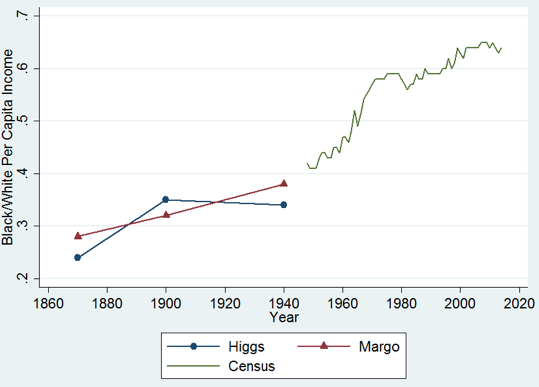 Each time I see this evidence, I am bemused. You see, I often debate colleagues on particular features of social policy in order to assess policy reforms or the effects of past reforms. But, its always good to take a step back and look at the long-view of history. It puts things in perspective. The Margo graph does just that. It tells me the story of what could have been. And just for the sake of remembering properly (infer whatever conclusions you like), it is worth showing racial differences in unemployment rates since 1890. What strikes me is how similar the rates are until the 1950s. What happened at that point? When you ask yourself this question, you’re forced to put everything in perspective. And it becomes harder to have “generic” answers in the lazy-form of “its racism”. Why would racism explain the difference after 1950, but not before?

Maybe, just maybe, people like Tariq Nasheed should stop proving that H.L. Mencken was right in saying that “for every complex problem, there is an answer that is simple, clear and plainly wrong”.