Recently, I reviewed Unequal Gains (Princeton University Press) which is basically the magnum opus of economic historians Peter Lindert and Jeffrey Williamson. In the pages of Essays in Economic and Business History, I survey the history of growth and inequality in the United States since 1700 that they portrayed in their book.

Coming out of their book, I could not help feel depressed and simultaneously vindicated in my classical liberal outlook of the world. While they avoid the Pikettyesque tendency to create “general laws” of inequality, their results suggest that inequality has risen in spite of massive government intervention since the 1920s.

To be clear, Unequal Gains is probably the best book you can get on understanding the dynamic of inequality. Although I am biased in their favor since both authors have given me great help in my academic career, the book should overthrow Capital in the 21st century as the reference work on inequality. Throughout the book, they use normal economic theory to explain why inequality increased or decreased (discrimination, capital flows, immigration, changes in labor force participation, urbanization, relative factor scarcities, uneven supply shocks, changes in returns to human capital, regional income differences). They constantly eschew general laws. From the book, we should understand that inequality is context-specific. Like a recipe, difference mixes of the ingredients of inequality will yield different courses. This is the main strength of the book (plus the tons of data).

And this is also why it is depressing. The vast majority of inequality before 1910 in the United States would have been the result of market forces (immigration, urbanization, capital flows, relative factor scarcities, regional income differences) and not of governmental decisions. I believe that the pre-1910 level of inequality is sensibly overestimated and that, while not gigantic, government policies did have a non-negligible role in raising inequality. Nonetheless, most of these inequalities are hard to judge negatively. More immigrants from poor Italy may depress (I do not agree with that claim, but people like G.Borjas of Harvard could make this claim) wages in the United States in 1900 and increase inequality, but the migration of the Italian to America leaves no one worse off while improving the living standard of the Italian migrant. Urbanization, as part of the industrialization, is a hard process to fault and criticize. So, inequalities before 1910 are simply an issue of explaining their levels and trends.

After 1910 however, there is what Lindert and Williamson call the “great leveling” where there is an important decrease in inequality which ends in 1970. This is where I become depressed. In my paper, I highlighted that most of the fall in inequality between 1910 and 1970 occurs because or regional convergence, gender wage convergence and racial wage convergence. Between the 1910s and 1970s, differences in per capita state-level incomes narrowed dramatically (and they have since slightly widened). Between 1910 and 1970, thanks to the migration of blacks to the north, wages between whites and blacks grew closer together. Between 1910 and 1970, thanks to the arrival of household amenities like running water, appliances and electricity, women joined the labor force and the gender wage gap narrowed. None of these factors have anything to do with redistributive policy. Now, I am not claiming that redistributive policy had no impact on inequality measures (that would be empirically false). What I am claiming is that numerous forces were at play – some of which were related to non-governmental factors. Between 1910 and 1970, if one looks at ratios of government spending to GDP, there is a massive increase in the size of government. And yet, many factors of convergence had little to do with government. 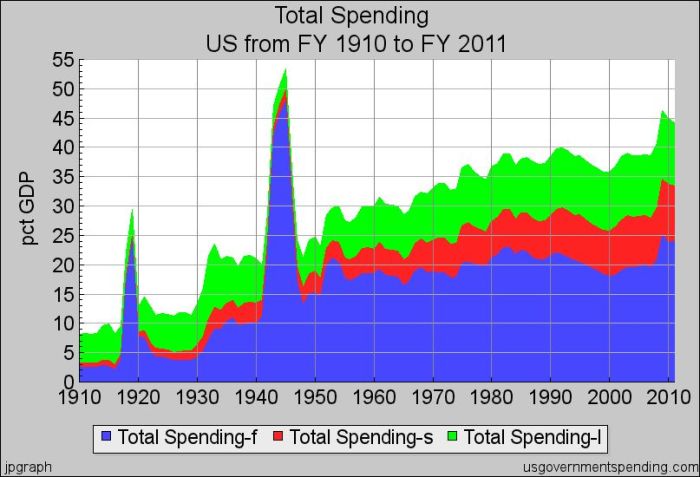 Since the 1970s, inequality has surged again – and this is in spite of the fact that governments are growing larger in many respects. While spending is at all levels seems to be either stable or growing, regulatory barriers like licensing regulations and rent-seeking arrangements in the form of corporate bailouts have multiplied. Thus, the rise of inequality occurs in spite of a very active state. Not only that, but I am working on papers with John Moore of Northwood University to study inequality from 1890 to 1940 because we believe that the level is overestimated and misunderstood and (by definition) that this affects the trendline of inequality in the 20th century. If inequality in the 1920s falls slightly, the U-shaped curve of inequality (very high before 1910 falling to 1970 and increasing thereafter) described by Piketty and others becomes a flatter upward slopping curve (maybe more like a J-shaped curve). If me and John are correct (we are still crunching numbers and collecting data) inequality increased with state intervention.

And that is highly depressing. Now, I am a classical liberal who believes that state intervention should be limited. But it is not beyond to recognize that when the state throws tons of money of something, it might get a few things the way it wants (a broken clock is still right twice a day). Thus, I expected some social programs to have an impact (and I still believe that on a case-by-case basis, some social programs do reduce inequality) but I did not expect such a disappointing performance. One could even say “depressing” performance.

Nonetheless, I would suggest to everyone to read Unequal Gains and throw out Capital in the 21st century.

Note: To be clear, Lindert and Williamson are not making the claim I am making here. While their book is predominantly a “positive economics” work, they do propose some policy courses to reduce inequality and argue favorably for redistributive policy. This is merely my “positive take” on their book.

10 thoughts on “A depressing take on inequality”