Skip to content
HomeNever reason from a fatality rate 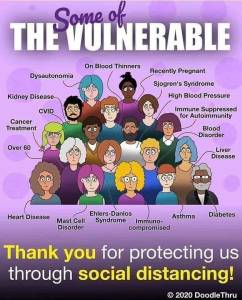 Richard Epstein has produced several posts and a video interview arguing that the mainstream media is overreacting to the Coronavirus pandemic. Richard understands the potential seriousness of this situation and the proper role of government. He recognises the value of the Roman maxim Salus populi suprema lex esto – let the health of the people be the highest law. In public health emergencies, many moral and legal claims resulting from individual rights and contracts are vitiated, and some civil liberties suspended.

Nevertheless, along with Cass Sunstein, Richard claims that this particular emergency is likely to be overblown. His justification for this is based on data for infection and fatality rates emerging from South Korea and Singapore that appear (currently) under control with only a relatively small proportion of their population infected. This was achieved without the country-wide lockdowns now being rolled out across Europe. Extrapolating from this experience, Richard suggests that the Coronavirus is not too contagious outside particular clusters of vulnerable individuals in situations like cruise ships and nursing homes.

The line of argument is vulnerable to the same criticism that one should never reason from a price change. The classic case of reasoning from a price change is reading oil prices as a measure of economic health. When oil prices drop, it could herald an economic boom or, paradoxically, a recession. If the price dropped because supply increased, when OPEC fails to enforce a price floor, then that lower price should stimulate the rest of the economy as transport and travel become cheaper. But if the price drops because economic activity is already dropping, and oil suppliers are struggling to sell at high prices, then the economy is heading towards a recession. The same measure can mean the opposite depending on the underlying mechanism.

The same logic applies to epidemics. The transmission rate is a combination of the (potentially changing) qualities of the virus and the social environment in which it spreads. The social environment is determined, among other things, by social distancing and tracking. Substantial changes in lifestyle can have initially marginal, but day after day very large, impacts on the infection rate. When combined with the medium-term fixed capacity of existing health systems, those rates translate into the difference between 50,000 and 500,000 deaths. You can’t look at relatively low fatality rates in some specific cases to project rates elsewhere without understanding what caused them to be the rate they are.

Right now, we don’t know for sure if the infection is controllable in the long run. However, we now know that South Korea and Singapore controlled the spread so far and also had systems in place to test, track and quarantine carriers of the virus. We also now know that Italy, without such a system, has been overrun with serious cases and a tragic increase in deaths. We know that China, having suppressed knowledge and interventions to contain the virus for several months, got the virus under control only through aggressive lockdowns.

So the case studies, for the moment, suggest social distancing and contact tracing can reduce cases if applied very early on. But more draconian measures are the only response if testing isn’t immediately available and contact tracing fails. Now is sadly not the time for half-measures or complacency. 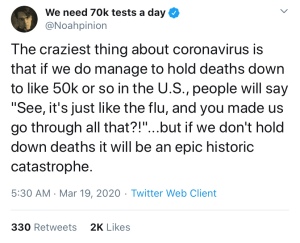 I believe that Richard’s estimated fatality rates (less than 50,000 fatalities in the US) are ultimately plausible, but optimistic at this stage. Perversely, they are only plausible at all insofar as people project a much higher future fatality rate now. People must act with counter-intuitively strong measures before there is clear and obvious evidence it is needed. Like steering a large ship, temporally distant sources of danger must prompt radical action now. We will be lucky if we feel like we did too much in a few months’ time. Richard believes people are more worried than warranted right now. I think that’s exactly how worried people need to be to adopt the kind of adaptive behaviors that Richard relies on to explain how the spread of infection will stabilise.

5 thoughts on “Never reason from a fatality rate”