Skip to content
HomeHong Kong protests: justified but futile in the end

The world is closely watching the developments in Hong Kong. Brave youngsters are testing the limits and patience of the Hong Kong authorities, first protesting against the extradition law, enabling Hong Kong citizens to be sent to China in case of serious allegations, and now with much broader demands for several kinds of liberties. Anybody with who cares for personal and political freedom can only watch in great sympathy, knowing that this is a modern day version of a number of small Davids against the towering power of the Chinese autocratic Goliath, with the Hong Kong authorities as its stumbling middle man.

I happened to be in Hong Kong for a few days, just for touristic purposes, in the first half of the past week. Arriving from mainland China on Monday, we encountered the protests a number of times. The protests caused major traffic jams, making it impossible to leave the train station in the regular way. Yet a small detour on the metro sufficed to reach our hotel. Later that night, we tried to reach one of the night markets, which turned out to be impossible: not only had the traders already packed their stuff, because a prominent protest location was just around the corner, students had also blocked the road and made sure our taxi returned nicely to where it came from.

In the hotel we could watch live footage from confrontations between the police and the protesters, with the latter throwing stones and rocks against a police station just a few hundred meters from our hotel in Kowloon City. At times, it seemed there were as many journalists as there were protesters, which is of course an encouraging sign from the perspective of press freedom. The next day we went to Hong Kong University, but only the Student Union was in full protest mode, there were no visible signs of other unrest at the campus. 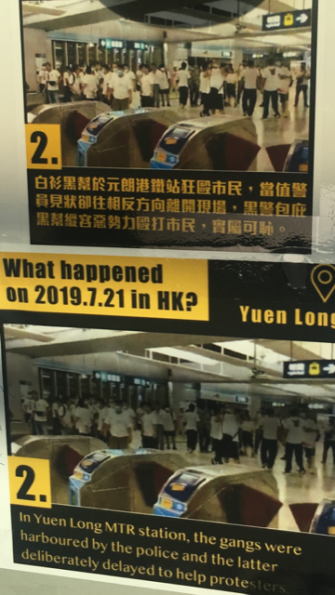 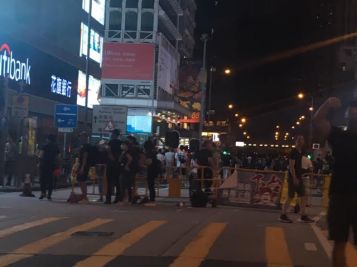 There were lots of protests at night though, as the coverage in the main Hong Kong quality paper South China Morning Post made clear.

One of the main questions this week was whether the Chinese army or police force would interfere. The local Chinese army commander hinted at it, while about 12,000 policemen gathered in nearby Shenzhen, just across the border in the mainland. The Hong Kong authorities, notably executive leader Carrie Lam and several police commanders, emphasized they were perfectly capable of handling this situation themselves. Given the developments in the past months one can question this, but the hesitation of Beijing to interfere is comprehendible. They do not want unrest, in the wake of the 70th anniversary of the People’s Republic later this year, while they know that direct action will make it impossible to get realigned with Taiwan in the foreseeable future, which has been a main goal of any Chinese leader since Mao, current leader Xi Jinping in particular.

Lam hinted at a press conference that the protests only foster the quick termination of the ‘one country two systems’ situation, agreed as part of the handover Treaty with the British in the nineteen eighties. One of the important elements is that Hong Kong keeps its own liberal laws and regulations for the first 50 years after the transfer of sovereignty in 1997.

Earlier protests died down, without much change achieved, mainly because the protesters did not succeed in broadening their movement to the wider public in Hong Kong. Although there was a supporting demonstration of public servants last Friday, this may happen again. On Wednesday, small traders already complained about the income they lose due to all the protests. And there are the mysterious groups of men in white t-shirts who beat up the protesters.

However, in the midterm, the protests will be futile. In the end this is an internal Chinese issue. Sure enough, there will be international protests, and depending on the outcome of the current crisis, perhaps also economic sanctions against China, if it just ends the protests by police or army action. These international protests are mainly symbolic though. Economic sanctions are the instruments of the impotent, not the powerful. Never have they worked to change a regime, or to make live very miserable for the leaders of a country. They do hit the population, but his and her concerns are easily overlooked in the international arena. The sad but undeniable truth is that no foreigner is going to die for Hong Kong. The great powers will treat this an internal Chinese affair. The USA already said so. No foreign power will intervene in China if the terms of the Sino-British Treaty are tampered with. At present, it is far more likely that Hong Kong will lose its special status, perhaps also earlier than the 50 years agreed, than that China will change into the liberal direction. The world may protest, but in the end the Chinese will have their way.

9 thoughts on “Hong Kong protests: justified but futile in the end”