I used to believe that specific individuals are either consequentialists or deontologists, i.e. some people are very sensitive to consequentialist reasoning while others were immune to it, and vice versa. At the very least, I expected individuals to combine both approaches in a consistent way (for example, by being consequentialists only two-thirds of the time). But now I think this is putting the cart before the horses: what happens in practice is that an individual first decides which policy she wants to defend, and then employs the mode of argument that is more favorable to the policy in question.

Throughout the 1960s and 1970s, right-wing military dictatorships were pretty common in Latin America. These governments often committed heinous crimes. When, years or even decades after the fact, the issue of punishing those responsible came to the fore, right-wingers opposed the move from a consequentialist perspective –social peace is worth preserving, isn’t it?–, while left-wingers took the deontologist stance –surely those who committed crimes against humanity should be harshly punished. But when the discussion turned about pardoning left-wing guerrillas, as in the 2016 peace referendum in Colombia, the tables turned: now the right found intolerable that criminals would be pardoned for the sake of social peace. (It is worth noting that in Argentina, where several former military commanders, including some with atrocious human rights records, contested and won elections after the return to democracy, the right never raised deontologist objections against them.)

I see the same pattern in Mexico today. During the electoral campaign last year, then candidate Andrés Manuel López Obrador was harshly criticized for raising the possibility of an amnesty for members of drug cartels in order to pacify the country. To be sure, there are many ways in which such a strategy could go wrong; but the criticism focused on the moral horror of pardoning drug dealers. Predictably, now that the government of López Obrador cut fuel supplies in order to prevent gasoline theft –something against which his predecessors had done nothing–, his opponents have found the virtues of consequentialism: the policy is creating (serious) fuel shortages. As you may guess, the government highlights the importance of combating criminals, without paying much attention to the consequences.

All of this reinforces the point repeatedly made by Cowen and Hanson: politics is not about policy, but about the relative status of different social groups. That said, the fact that we (unconsciously?) pick our preferred policies/stances first and decide how to defend them afterwards only begs the question: what determines whether we end up positioning ourselves in one side of the political spectrum or another? And given that we sometimes (but rarely) switch sides, what are the motivations behind these changes?

A couple of days ago, Tyler Cowen asked which is “the best book about each country:”

To count, the book must have some aspirations to be a general survey of what the country is or to cover much of the history of the country.   So your favorite book on the French Revolution is not eligible, for instance…

He explicitly skips South America. I can’t blame him, as I’ve never found a book that fully captures (the interrelationship between) the five things that make Argentina Argentina:

1. The fight between Buenos Aires and the Interior for fiscal resources. This was the main cause behind the civil wars of the XIXth century, and the eventual solution — the creation of a federal state that could check the power of Buenos Aires, and where the provinces of the interior would be politically over-represented — continues to be a defining feature of the country’s political economy to this day.

2. The division between “unitarios” and “federales,” which also began in the XIXth century. Although this cleavage was ostensibly about how to organize the country territorially, we should not forget that “politics is not about policy:” the actual division was about the relative status of different social groups. Specifically, he federales fell in the “Trumpian” side of the spectrum, praising the common, unsophisticated man “from here” as opposed to the high-brow cosmopolitanism promoted by the unitarios. Again, this division did not end in the XIXth century; Argentina’s political history during the XXth and beyond — and most notably the phenomenon Peronism — simply cannot be understood without making reference to this opposition.

3. The great immigration. Between the end of the XIXth and the beginning of the XXth century, Argentina embarked in a great social experiment that sought to transform the country by importing huge numbers of European immigrants. During this period, Argentina was the country that most immigrants received as proportion of its population, being second only to the US in the absolute number of immigrants it received. The assimilation of such immigrants was mostly successful, but also had profound consequences in terms of demographics, language, culture, cuisine and surnames (where do you think mine comes from?), as well as the way Argentineans perceive themselves: as a middle-class country of immigrants in which hard work allows you to get ahead in life.

4. Nationalism. One of the unintended consequences of the great immigration was the (government-sponsored) construction of a new national identity, defined in terms of territory rather than blood, race, or national history. This is the origin of Argentines’ sickly relationship with national boundaries, most patently seen in relation to the Malvinas/Falklands issue.

5. Pretorian politics. Between 1930 and 1983, Argentina was governed by no less than five different military regimes (in 1930, 1943, 1958, 1966 and 1976, respectively). The last of them (1976-1983) was especially murderous, as the military  systematically “disappeared” thousands of guerrilla members, political activists, union leaders and Left-wing sympathizers in a vain attempt to engineer a new political system. It is impossible to make sense of the political, social and cultural attitudes that have predominated in the country since 1983 without understanding this past.

Unfortunately, no book comes even close to capturing all these factors simultaneously. That said, the ones that best approach this ideal are the following:

2. Larry Sawers, The Other Argentina. The Interior and National Development. As far as I know, it hasn’t been translated; please tell me I’m wrong.

3. Nicolas Shumway, The Invention of Argentina. There is also a Spanish edition. 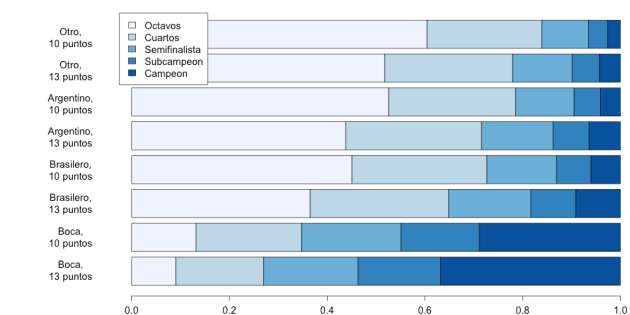 Military interventions occur when, in this push-and-shove play for influence between the military and the government, the latter oversteps and “rocks the boat” too much. (Milan Svolik, The Politics of Authoritarian Rule, Cambridge University Press, 2012, ch. 5)