A friend of mine has a great phrase that captures what’s wrong with about 1/3 of the population. They’re “people who would make good Nazis.” These are the obedient people who are ready to follow orders without thinking without having sufficiently high standards for whose orders they’ll follow.

My question is “what can I do to help my students not fall into this category?” The trouble is that these folks aren’t drawn to intellectual arguments. I need to get them in a more visceral way. I think the answer is art. These kids need to be watching TV shows and movies/shows like Donnie Darko and The Handmaid’s Tale (tell me your favorites in the comments!). They need something that will grab them by the lapels, shake them, and shout “question authority!”

Pragmatic folks (the sort of people who are normally excited to hear what a libertarian economist has to say) would usually think that schools should focus on pragmatic things. It’s certainly a good idea for kids to leave school with some ideas about how to manage their personal finances and research important issues. But the economic justification for subsidies rarely favors such pragmatic topics. Petroleum engineers don’t need their schooling subsidized because they’ll end up getting paid enough to pay off their student loans.

I like to think of myself as a pragmatic person*, but I’m increasingly coming around to the idea that art is worth subsidizing. Even (perhaps) if that means giving money to ridiculous people who argue incoherently against freedom. 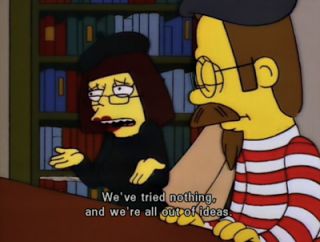 As subsidies go, art is cheap. You don’t need to build anything as complicated as a particle accelerator. You just need to grab some kid out of the nearest Starbucks and give them a few bucks to make something.

You’ll end up paying for a lot of garbage, but life is full of waste (I’d bet good money that any good project involves a good amount of unrealized potential savings that are only obvious after the fact). For that matter, you’ll almost certainly do some degree of harm. If we threw money at art departments (the way we did with STEM departments during the cold war) the money spent on Che shirts could easily fuel the western hemisphere by attaching a generator to Guevara’s spinning corpse.

And the benefits will be vague and arguable. I’m not in the business of selling bonafide snake oil; this idea isn’t a magical cure-all.

In fact, the more you try to measure the benefits, the less benefit you might get. If we could measure important but intangible things like decency and thoughtfulness, we’d already have those things. But when we try to come up with proxies for important things, those proxies quickly become bad proxies. All the more so if we try to reward people for measurable achieving our goals. Funding should be unconditional (and focused on production rather than selection) if we want to avoid funding propaganda. We almost certainly will be funding propaganda, but if humanity is really worth saving, it’s a baby/bathwater tradeoff.

I’ve just spent three paragraphs convincing you that this might be a terrible idea. But I still think the net benefits could justify the cost. Imagine some imperfect estimate of the impact and an even more imperfect measure of the value created. What will we get out of this (on average)? In a word: more. More novels, web comics, paintings, podcasts, and films.

And with more art, there’s more cream to rise to the top. The best art typically encourages thoughtfulness and empathy. This is a “let a thousand flowers bloom” approach that would (at relatively low cost) saturate the public sphere with enough semi-thoughtful stuff to force usually-thoughtless people to think more clearly about the world around them.

If** we can subsidize free thought, this is how we’ll do it. And if it’s possible, it’s worth doing in a world where we clearly have too many people who would make good Nazis.

*If that was really true I’d work in a bank.

**Do I really think this would work? I’m not remotely sure. But I think it’s an idea worth discussing. I teach economics because I hope the marginal return (in terms of improving the “civic quality” of my students) is high. But it feels Sisyphusian at times, and some students are clearly not ready to get it. I worry that they’ll go out into the world ready to follow any maniac’s orders. In terms of the stability of a free and peaceful society, doing something about those people seems important.

7 thoughts on “What classes are worth subsidizing?”

Leave a Reply to What classes are worth subsidizing? (How about the artists?) via /r/economy | Chet Wang Cancel reply