We live in a data-driven world–that’s new. Spreadsheet literacy is becoming a cultural norm and, like any literacy, is a tool that shapes thought.

We live in a propaganda-driven world–that’s old. Very old. It’s as old as blaming Eve for, well, everything.

Propaganda works. Maybe women (Pandora, Hera, Eve, Steinem) don’t deserve all blame for the existence of evil. It took a few millennia to erode that propaganda, and the erosion is still a work-in-progress.

Propaganda is marketing, it is lawyering, it is every special-interest group. It is the pursuit of self-interest unfettered by principle. It is the lie of omission. It is prejudice.

A business is prejudiced about whether you should buy its product. In order to manipulate you out of your money, the business is going to lie as much as the law allows (really, that it can get away with). Nobody complains that they were lied to when the TV told them Budweiser is the king of beers. The prejudice of the television commercial is understood.

Lawyers are prejudiced in favor of their side. They’re not supposed to be responsible for the whole truth. They’re supposed to omit the inconvenient parts and manipulate as much as they can. If your lawyer is honest about all your flaws in court, you fire that lawyer.

It is not the National Rifle Association’s role to point out parts of the Second Amendment that could limit the right to bear arms. Nor is it the Brady Campaign’s role to highlight parts that could limit gun control. Both avoid that which harms their brand. Special interest groups are prejudiced, by design.

So, what happens when an anti-prejudice movement becomes a special-interest group? Do we get prejudiced anti-prejudice activism? Let’s take a look at Black Lives Matter.

One of propaganda’s main tactics is cherry-picking the facts. In modern terminology, one might call it the data-driven lie.

Since we live in a new age of data-literacy, there should be more tools for detecting data- driven propaganda. A graphic organizer in the form of a simple table can aid thinking about a particular news report. The table might have the following columns:

I hereby dub such a table a “Fairness Matrix.”

A good test case is the Black Lives Matter accounting of the shooting of Trayvon Martin, which launched the movement. 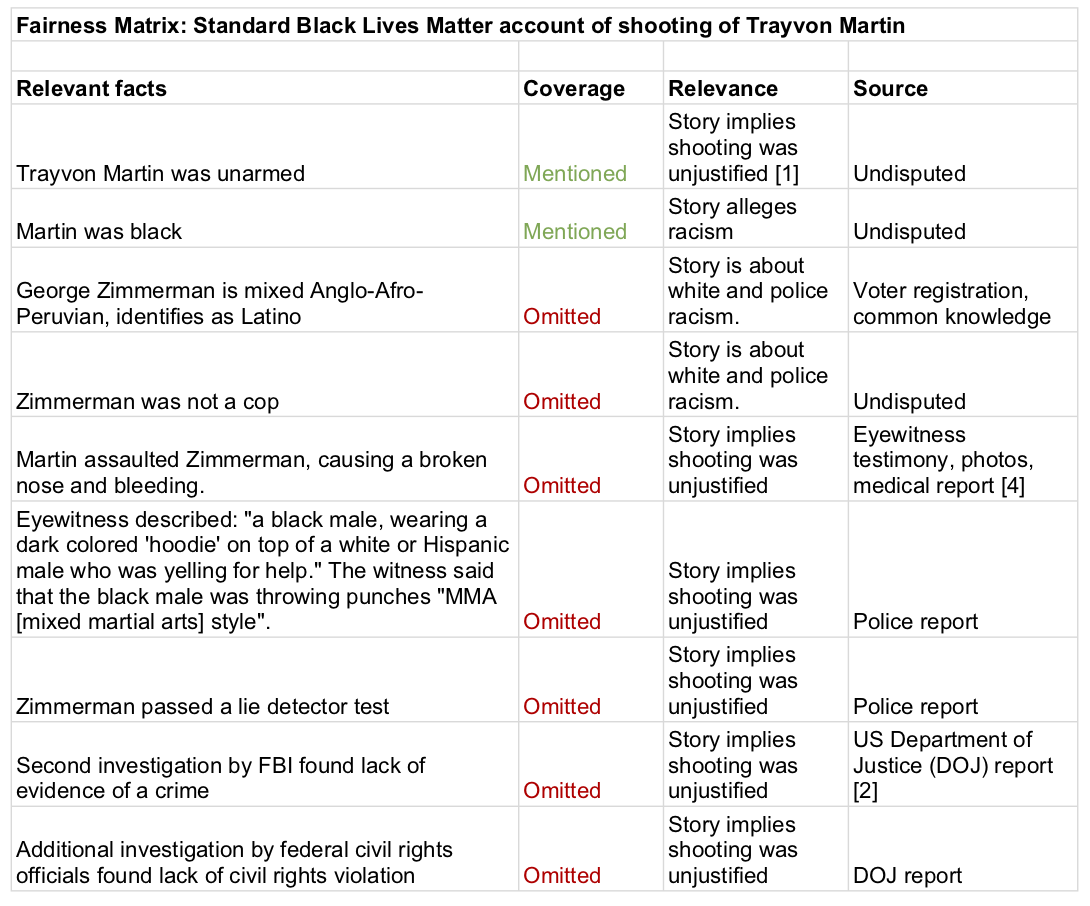 The flagship case is the police shooting of Michael Brown in 2014. The five-year anniversary was 2019, prompting recapitulations such as a New York Times editorial by law professor Justin Hansford. In a fairly typical summary of events, Mr. Hansford leads the public to believe that Michael Brown was peaceful, had his hands up, said “Don’t shoot!,” and that his dying words to a friend were “Keep running, bro.” He suggested the only reason the police officer wasn’t indicted was deceit by the prosecutor.

It’s more complicated than the Trayvon Martin case, and therefore a stricter test of the value of the Fairness Matrix. 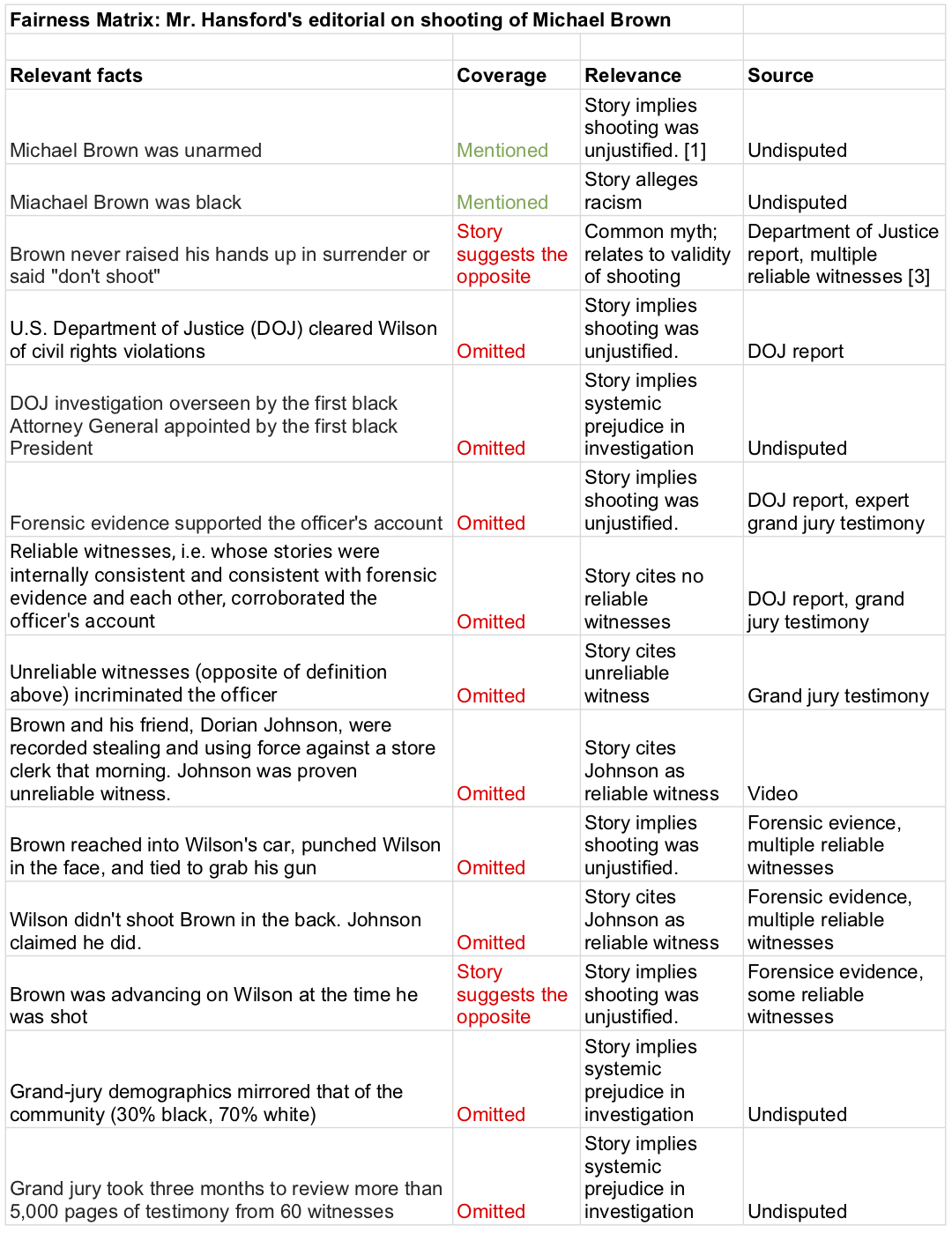 A fairness matrix for a lawyer’s argument, TV commercial, or special interest group would look the same. Mr. Hansford’s editorial is propaganda. Since it is widely accepted, it is presumably effective propaganda. It’s an advertisement, or myth.

When do myth-creators start believing their own myths? The mind is its own place, and in itself can make truth of a lie, or a lie of the truth.

Maybe prejudiced anti-prejudice activism is more counter-productive than other kinds of propaganda. Darren Wilson, the police officer in the Michael Brown case, and his family live with death threats and a ruined career: the hatred of an anti-hatred movement.

Scandals sell best in the media, which is why propaganda relies on human-interest stories. But anecdotes can only reveal anecdotal racism. Systemic bias is statistical–and if there is one type of article that doesn’t make for juicy clickbait, it’s a math article.

An example of possible systemic racism is low investment in research on sickle cell disease. Sickle cell is a condition that disproportionately affects people of African ancestry.

Both diseases are genetic and affect life-expectancy similarly. However, more than three times as many Americans have sickle cell disease as cystic fibrosis. Why, then, is this the case:

For 2 disorders (ie, hemophilia and cystic fibrosis), effective national networks of specialty clinics exist and reach large proportions of the target populations. For other disorders, notably, sickle cell disease, fewer such centers are available, centers are less likely to be networked, and centers are used less widely.

Do the numbers add up to systemic racism? The vast majority of sickle cell patients are low-income and on Medicaid. Medicaid reimburses less than private insurance, which makes it harder for drug companies to profit from it. If the systemic bias is caused by income and not race per se, is it still racism? Maybe it is, if racism is the cause of the lowered income, but that bias would lie beyond the healthcare system.

Exactly what makes something racist, anyway?

Philosophy is even worse than math at selling clicks. At least statistics can be turned into nice charts with bright colors. 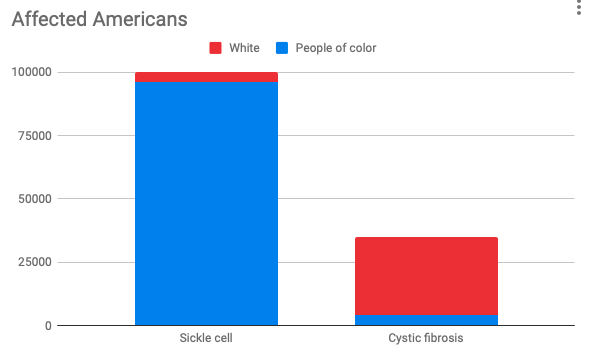 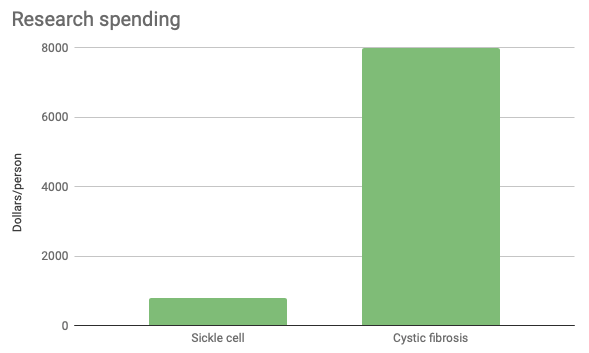 Is it bias? It’s normal for rarer conditions to cost more per person, but this is greater than a factor of 10. Why are there more research articles, more new drugs, and more speciality clinics for cystic fibrosis? Taken as a whole, it sure looks like systemic bias based on wealth, race, or both.

Then, again, there is this research: “White officers are not more likely to shoot minority civilians than non-White officers.”

But then, again…. many of the names used in the study as typically African-American are Muslim or Arabic in origin: Aisha, Keisha, Hakim, Kareem. The study was conducted in 2001- 02, immediately after the 9/11/2001 attacks on the World Trade Center. It was the most Islamophobic period in recent US history. Yet, the study didn’t consider ethnic or religious bias as factors.

These examples of bias differ fundamentally. The cases of policing and employment entail prejudiced people in positions of power. The example of healthcare research doesn’t, making it “true” systemic bias. It demonstrates the possibility of prejudiced design without a prejudiced designer.

By any means necessary?

Awareness of systemic bias should be improving, simply because it is a type of data- awareness, and data literacy is on the rise. On the other hand, propaganda is an ancient weapon, wielded by a fallen truth-seeker who would rather reign in hell than serve in heaven. It’s tough to beat.

Why shouldn’t activists wield the proven sword of propaganda? Modeling the whole truth is difficult, holds little sway over public opinion, and turns no profit for mass-market news. Integrity is for losers. Lying for a just cause seems fair (but, if you’re a liar, how do you know what’s just?).

There must be something wrong with taking lawyers and advertisers as models for how we treat each other (this is why a human couldn’t be the ring-bearer: it had to be a more honest race, like hobbits.) Surely, social progress depends on progress in our personal integrity.

Perhaps, lying for a just cause is wrong when the cause is an end to lying. Isn’t racism itself a type of dishonesty, to self and others, in the pursuit of self-interest?

(1) Black Lives Matter and the excellent Tampa Bay Times report put a lot of emphasis on being unarmed. How much weight does it really deserve? Being unarmed doesn’t justify assault. Nor can there be certainty about what doesn’t exist–must one wait until a gun is pulled out, to act in self-defense?

(2) The DOJ report on Trayvon Martin

(4) Photo of George Zimmerman after being assaulted by Trayvon Martin.

Ben Sharvy is a K-12 teacher in Portland, OR